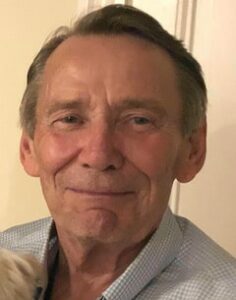 Scott Carson Moriearty passed away on July 27, 2021 at his home in Cambridge, Massachusetts. He was 74 years old. Scott was, in the words of those who knew him, brilliant, unwaveringly principled and fair, kind, resolutely unpretentious, warm, and deeply devoted to those he loved.

Scott was born on December 18, 1946 to Frances and Jim Moriearty in Bloomington, Illinois and raised with his older sister, Pamela, in Lincoln, Illinois. Though he was born with spina bifida in an era when mere survival was uncertain, Scott flourished. An extraordinary student, Scott was valedictorian of his high school class and traveled to the White House in 1965 as one of the country’s 100 Presidential Scholars.

Scott attended Harvard College, graduating Phi Beta Kappa with a degree in American History and Literature in 1969, and Harvard Law School, where he was an editor of the Harvard Law Review. Along the way, he married his high school girlfriend, Sharon Perry, and their daughter, Perry, was born in 1969.

Over the next three decades, Scott practiced labor and employment law at the Boston law firms Foley Hoag and Bingham Dana with a two-year hiatus as a law professor at the University of Illinois. As principled as he was intellectually rigorous, Scott represented clients in numerous high-profile cases before the U.S. Supreme Court, federal and state courts, the National Labor Relations Board, and the Massachusetts Commission Against Discrimination. He was the author of a leading employment law treatise and a member of the prestigious American Law Institute. Scott was also deeply committed to service, running Foley’s public interest law program, representing public sector employees in employment discrimination claims pro bono, and serving on the boards of a variety of nonprofit legal service organizations. He was also a gifted educator, earning the “Outstanding Teacher” award from the Illinois Law School graduating class of 1977, and a popular presenter at law conferences. Scott retired from private law practice in 2002 and spent the rest of his career working as a special counsel, arbitrator, and mediator.

Throughout his life, however, Scott’s chief avocation was his family. In 1992, Scott married Yolanda Kodrzycki, and in 1995, their daughter Ellie was born. From fall weekends in Center Sandwich, NH, to lunches at the Full Moon, to the sidelines of lacrosse games and cross country meets, Scott was a present parent and grandparent in every sense of the word. He was also an avid reader, fly fisherman, astronomer, and woodworker, remained firmly opposed to all forms of social snobbery and ostentation, and was committed to knowing almost everyone who crossed his path on a personal level.

A memorial gathering will be held in Cambridge on August 29. As an expression of sympathy, donations in Scott’s memory may be made to the Frances Lane Moriearty Memorial Scholarship at Lincoln College, Lincoln IL.