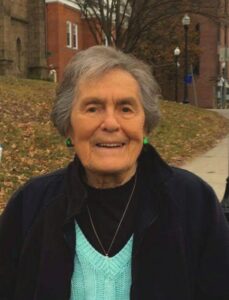 Shirley Labbee Boron passed away on February 3, 2019 at the Hospice of the Fisher Home in Amherst, MA

She was born in Hatfield, MA on January 6, 1929 to Alice (Toczko) Labbee and Wilfred Labbee. She married Stanley (Sonny) Boron on July 4, 1949 and they lived in South Deerfield.

Shirley loved being a stay at home mom but also later in life loved her job at the UMass Daycare Center as administrative assistant to Beatty Blaine. She was also a great help to her children Shelley and Ricci at All Around Tile doing bookkeeping. Volunteering at the Baystate Franklin Medical Center gift shop was something she enjoyed very much.

Sonny and Shirley enjoyed many summers at their camp on Lake Wyola while their children were young; boating and waterskiing and winters in their backyard snow skiing on Eastern Avenue. They also spent winters at their home in Florida after retirement and loved the beach.

She was predeceased by her husband Stanley Sonny Boron of 68 years. Shirley leaves her four children, Sharon, David and his wife Kathy, Cheryl, and Shelley and her husband Ricci Smith. She also leaves her four grandchildren: Jason and his wife Jennifer, Matthew and his girlfriend Christa, Lexxey and her boyfriend Nick, Christina and great granddaughters Jalynn and Jordyn. She leaves her sister-in-law Harriet Rogers as well as several nieces and nephews.

She loved being together with family more than anything. She and Sonny attended nearly all of their children’s and grandchildren’s events: Jason and Matt’s moto-x and sno-x races and Lexxey’s softball games and theatrical performances.

Shirley enjoyed tap dancing growing up and was a scholar and cheerleader in high school. Sonny and Shirley enjoyed dancing. Tennis was her sport and Rafael Nadal was her idol. She loved playing tennis with her family & friends.

There will be no calling hours. There will be a celebration of life in the Spring – date & time to be announced. Contributions in her memory may be made to Holy Family Church Capital Fund, 29 Sugarloaf Street, South Deerfield, MA 01373.