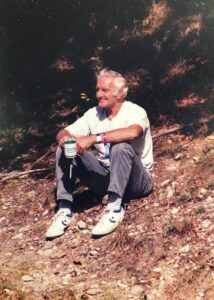 Stanley (aka Sonny, Fido or Wisdom) passed away on February 1, 2018 due to an automobile accident. He was born in Deerfield, MA on August 10, 1928 to Henry & Charlotte (Waskiewicz) Boron. He married Shirley Labbee on July 4, 1949. He retired in 1990 after 33 years from Deerfield Plastics. He also worked partime: Deerfield Police Officer, officiated basketball games, worked at Hosley Brothers and drove a milk delivery truck. Sonny and Shirley enjoyed many winters at their home in Florida.

He leaves his wife of 68 years, Shirley Labbee Boron and his four children, Sharon, David and his wife Kathy, Cheryl, and Shelley and her husband Ricci Smith. He also leaves his three grandchildren; Jason and his wife Jennifer, Matthew and his girlfriend Christa, Lexxey and great granddaughter Jalynn. He also leaves his sister Harriet Rogers and sister-in-law Evelyn Boron, as well as several nieces and nephews. Sonny joins his brothers Edward and Henry and sisters Sophie Sheppard, Victoria Savinski and Charlotte Cook.

Family was always #1 to him and he attended nearly all of his children and grandchildren’s events. He made a lot of friends over the years at Jason and Matt’s moto-x and sno-x races and Lexxey’s softball games and theatrical performances. He was an athlete who played semi pro football for the Greenfield Lions, as well as baseball and basketball. He was a talented diver, snow skier and water skier. Sonny was also an amazing artist and shared his paintings with many. One of his biggest passions was the outdoors. He loved hunting, fishing and exploring the wilderness right up until he passed.

There will be no calling hours. There will be a celebration of life in the Spring – date & time to be announced. Contributions in his memory may be made to Holy Family Church Capital Fund, 29 Sugarloaf Street, South Deerfield, MA 01373.