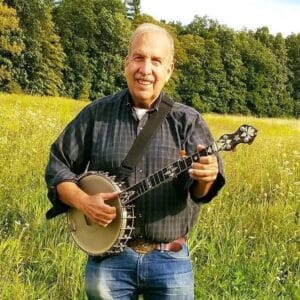 ARKIN–Stephen, Brooklyn-born banjo player and publishing executive, died at 78. He grew up among New York’s legendary Washington Square music scene, playing old-time and bluegrass music in early bands with Jody Stecher, David Grisman, Maria Muldaur, and other outstanding musicians. He went on to play banjo with Bill Monroe & the Bluegrass Boys. In James Rooney’s book Bossmen, Monroe is quoted: “Steve could play the best backup banjo I ever heard!”.

He won numerous banjo contests and played in many bands, including the nationally-known Northern Lights and Virginia-based Troublesome Creek, whose record on County Records received widespread critical acclaim. He played clawhammer and his own brand of 3-finger style with equal facility, and taught bluegrass and old-time banjo at a variety of music camps and festivals. Steve played most recently with his wife Cathy Mason and frequent collaborators in the Old Time music community including the band New Cut Road.

After attending Marlboro College, where he studied art history, he enjoyed a long, successful career in book publishing, including positions at Little Brown, Oxford University Press, and AMACOM Books. He was an avid antiques collector—especially the pottery of Ulisse Cantagalli and other renaissance-style maiolica. His homes were brimming with aesthetic marvels.

The son of Kenneth Arkin and Gertrude Feller, he often returned to live in Brooklyn (most recently Park Slope), but also established deep roots and life-long friendships in Salem and Cambridge, MA, and Cleveland, OH. He was equally at home—and surrounded by friends who were like family—at folk music hubs such as Clifftop, Lake Genero, Mount Airy, the Harry Smith Frolic, Gerde’s Folk City, and Club Passim (née Club 47). In 2018, he moved to a green oasis in Melrose, MA with Cathy—hiking, swimming, entertaining, traveling, teaching, and making music together.

Steve is survived by Cathy Mason, his daughter Emily Arkin and son-in law Chris Braiotta, his son Jon Arkin, and step-daughter Amelia Mason; his sister Susan Birkenhead, his nephews Peter Birkenhead, David Birkenhead, and Richard Birkenhead, his niece Alison Wall, their spouses, and twelve great-nieces and nephews, all of whom adored him.

A small family memorial will be held in Melrose MA, with a large musical celebration for friends and family to follow in the new year. Donations in his memory may be made to progressive political causes and get-out-the-vote organizations.