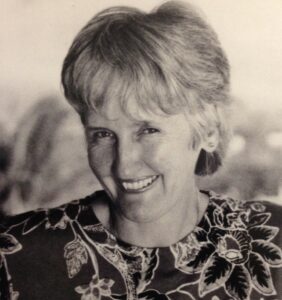 “Sylvie” was born in Norwalk, CT and graduated from the University of New Mexico where she met her husband Ian. She later received a Master’s in Art from Texas Woman’s University and an Associates Degree in Science from Imperial Valley College. Together they spent many years in Kauai, HI, as Ian was raised on a sugar plantation in Paauhau. His position with Boeing later moved them to Kwajalein in the Marshall Islands, and then to Bellevue WA . Sylvie’s careers included teaching high school on the Islands, lecturing in education, working with children as an emergency and critical care nurse in her Seattle home base, and later as a free lance writer.

A childhood battle with polio and extensive travel gave Sylvie a unique perspective on life. In addition, she had a lifelong love affair with the Islands and the native people who lived there. Her vast experiences and treasured friendships were reflected in her children’s books, The Flying Chickens of Paradise Lane and Green Mango Magic, both of which won recognition throughout the literary world. Sylvie enjoyed life! She had a beautiful, kind spirit, and was a friend to all. She wanted to share her happiness and joy with everyone.

A celebration of her life is planned at Putnam Farm in Danvers on July 29, 2017 at 10:00am. Sylvie’s family is very grateful to the staff there for their dedicated care, love and support. In lieu of flowers, contributions in her memory may be made to Friends of Sakonnet Lighthouse, Inc., Box 154, Little Compton, RI 02837 or Massachusetts Society for the Prevention of Cruelty to Children, 3815 Washington St., Jamaica Plain, MA 02130