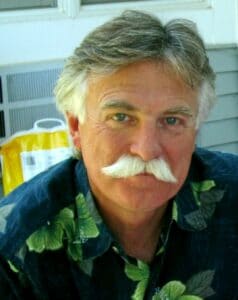 Thomas M. Prezkop, age 73, of Newburyport, passed away at the Kaplan Family Hospice House in Danvers on January 6, 2022, after a hard-fought battle with pancreatic neuroendocrine cancer. His wife, Melanie Hession, was at his side.

Tom was raised in Westport, CT and grew up on Long Island Sound. It was there that he taught himself to sail, which started a lifelong love for all things aquatic.

In early 1971, Tom’s best friend, Michael Vincent, invited him to work on the island of St. Maarten.  There he co-owned and restored the Black Swan, a 108’ ketch which he and his partner, Doug Hazelton, chartered out of Simson Bay. He also managed restaurants, started an omelet cafe with Michael, and captained other boats.

In 1978, Tom returned to the United States, and settled in Massachusetts where he married his first wife, Linn Anderson, and where their son Andrew was born.

Tom’s second career was in mechanical design engineering. He was employed by Instrumentation Labs and other medical device companies before founding Andover Medical Development Group to do medical device component manufacturing in 1987. He operated AMDG for 35 years, fulfilling contracts with NASA, Boston Scientific, and others.

Tom was a passionate sailor and loved being outside on the water.  He was an expert angler, certified scuba diver, licensed pilot, and professional cook.  He was also a gifted athlete who enjoyed downhill skiing, surfing, water skiing barefoot, and golfing. His skills as a carpenter, engineer, and inventor meant he could build and fix anything, and all his friends and family knew it.  A lifelong learner, he always said “Teach what you know, learn what you don’t.  He was a generous, compassionate, loving husband, father, and friend.

Tom was proudest of his son Andrew of Golden CO to whom he passed his endless patience, creativity and playfulness, and in whom he fostered lifelong passions as a musician, athlete, craftsman, outdoorsman, adventurer, and father.  He was overjoyed to be a grandfather to Avery and Luke, who both knew him as “Papa T”.

In 1995, Tom and his friend rescued a fellow boater who had fallen overboard in Gloucester Harbor and who had been seriously injured by its propeller.

For this, Tom received a Public Service Commendation from the US Congress “for demonstrating courage and initiative in saving lives, qualities in keeping with the highest traditions of the Coast Guard.”

He was pre-deceased by his parents Michael and Lithia Prezkop and his sister Diane Reed, all of Westport, CT.

There will be a celebration of life this summer. Details will be posted on Tom’s Caring Bridge Site at https://www.caringbridge.org/visit/tomprezkop.

In lieu of flowers, please consider donations to The Ocean Foundation at https://oceanfdn.org/projects/ and the Kaplan Family Hospice House at https://www.caredimensions.org/giving/.