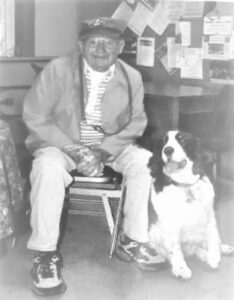 Leyden, MA- Trueman LeBaron Robbins, 92, of Leyden, passed away in his sleep of
natural causes at Linda Manor Extended Care Facility in Leeds on October 6th.
Trueman was born in Lexington, MA, August 27, 1928, the son of Trueman L. Robbins,
Sr. and Josephine L. Robbins (both deceased). He graduated from Lexington High
School and attended the Stockbridge School of Agriculture at the University of
Massachusetts, Amherst.

Trueman enlisted in the US Navy at the age of 17 and served as a seaman, second
class, from 1946-48 on the Heavy Cruiser USS Helena of the Asiatic-Pacific Theater,
and the USS Iowa. He was issued the WWII Medal of Victory.
After the Navy he embarked on his career in the area of horticulture. He began as an
arborist with the Frost and Higgins Co. of Arlington, MA, later assuming the position of
Vice President of the Northampton branch which he established in 1963. He retired in
1990 after forty five years.

While there, he and the Company received an award from Lady Bird Johnson for his
efforts in “The Beautifying America Project” which she spearheaded during her
husband’s presidency. Frost and Higgins Co. received other awards, most notably for
their ambitious planting of the trees at Boston’s Quincy Market where the trees were
flown in by helicopter in the 70’s.

Trueman was actively involved with the design and development of green- space in the
Western Massachusetts area. His Company was responsible for maintaining the health
and growth management of the trees at the local colleges such as Smith, UMass,
Amherst, Hampshire, Mount Holyoke, Vassar, Westfield State and Williams College, as
well as Look Park and Childs Park. Most of the established trees you see in downtown
Northampton and Amherst were planned and planted by his Company.

Trueman was an active outdoorsman, tennis player, volunteer and lover of animals,
especially his Springer Spaniels, Sam I, Sam II and Tucker, fondly know as “the library
dog.”

He was a Past President of the Northampton Lions Club, member of NAA, MAA and
NRA. He also served on the Board of Trustees for the Robertson Memorial Library in
Leyden.

Trueman is survived by his two daughters, Nancy Robbins Federici (David) of Norton,
MA and Gail Javins (William) of Knoxville, TN. Per his request there are no services or
funeral. His ashes will be scattered by his daughters at a later date. Depending on the
Covid situation, a Memorial Service may be held in the Spring in Leyden. Donations in
his memory may be made to the Robertson Memorial Library, 849 Greenfield Rd.,
Leyden, MA, 01031 or to your favorite animal rescue shelter.

An online guestbook in the obituary section is available at www.www.bostoncremation.org