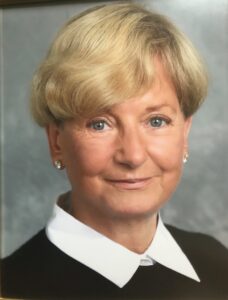 KRISTOFFY, Ursula “Ulli” Theresia (Naegel), 84, of Concord, Massachusetts, died 31 July 2017 of ovarian cancer in hospice at Wayland, MA, USA. Many commented how peaceful she looked.
Ursula was born on 27 Feb 1933 in Berlin, an unexpected twin nearly an hour after her brother Peter Georg. The twins were raised in Hannover, Germany as the eldest of five children to parents Wilhelm “Willy” Joseph Naegel (1904-56) and mother Hertha “Peter” Charlotte Peters (1904-69).
Ursula married Ivan on 20 Aug 1960 in Hannover – they nearly reached their 57th wedding anniversary this year. In 1961, they moved to the USA, first to Connecticut where their two sons where born, then Ohio for Ivan’s new jobs, and finally to Concord in 1975. Ursula worked hard all her life, including in Concord at Sentry Insurance and later running her own senior home-care business.
She survived the second world war and the challenges of being raised by governesses because her parents were usually absent. Her father was a business director and later joined the first post-war government, personally invited by Konrad Adenauer, West Germany’s first chancellor. Her mother was busy socially, relying on maids and house staff.
Ursula deeply loved, and was deeply loved by, her Hungarian husband and two American sons and their families. She was sensitive, generous, intelligent, and wise, gained partially from her conversations with her father about world affairs and politics, and also from her mid-life when she began a brave inward journey to face her challenging childhood.
In her life journey she read widely, from Rumi, to Proust and Tolstoy. In recent decades she quoted from buddhist texts such as Thich Nhat Hanh. On her hospice wall she hung her orthodox Christian icons and a Muslim prayer rug – a courageous eclectic display.
Ursula was genuinely loved and appreciated by her friends, often for her insightful and playful attitude, and for the loving difference she made in so many people’s lives. She was an active contributor at First Parish Unitarian Universalist church of Concord and was a founding member of its small group ministry, even singing for the dying in the threshold choir – she loved music.
Ursula appreciated so much beauty in life, especially in people, across all cultures of the world. She recorded her experiences and thoughts in her life memoirs book which she impressively completed in a space of six weeks while in hospice. She was an amazing woman.
Ursula leaves behind her husband Ivan Kristoffy aged 85 of Concord, her sister Annette Kubis of Hanover, and her two sons Andrew “Andy K” of Cornwall, England and Peter of Longmeadow, MA, along with their wives Andrea “Andy B” Brand and Ann-Marie, and Ursula’s six much loved grandchildren Alex, Robin, Liam, and Kiera, Nicholas, Emma respectively.
Ursula’s cremated ashes will be interred during a private ceremony at The Knoll gate, Sleepy Hollow cemetery in Concord beside Ivan and Ursula’s shared gravestone, a pink-granite double-heart near the center.
A memorial service will be held on Saturday 26 Aug 2017 starting at 11:00 (arrive 10:30) at First Parish Church of Concord (center), 20 Lexington Road, 01742, telephone 978-369-9602, followed immediately by a reception with a light buffet lunch. All Ursula’s friends are welcome!
Instead of flowers, memorial donations are gratefully accepted by the First Parish Transylvania Partnership Community to which Ursula and Ivan devoted so much of their time and energy, mainly supporting student scholarships. Please visit www.firstparish.org/tp for information, and to donate click the green “Donate Now” on the left side of that webpage, and in the Memo to First Parish box it is essential to type “Ursula Kristoffy Memorial Fund”. Check donations can be sent to First Parish, 20 Lexington Road, Concord, MA, 01742 and made to “First Parish in Concord”, and again it is essential to write “Ursula Kristoffy Memorial Fund” in the memo line. For international donations, please email fball@firstparish.org to request instructions.
Lastly, our family would like to thank all friends and family members, mainly in Massachusetts, but also worldwide in Europe and the Americas, for all their loving and proactive support shown to Ursula, Ivan, and their sons over the past eight months since Ursula was diagnosed. We are especially grateful to her medical staff at all levels of the profession who took extra kind steps to help Ursula in Boston, Concord, and at her Parmenter hospice residence in Wayland.
To leave a condolence or share a memory, please click below.