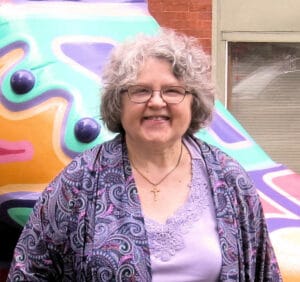 Vida Whitcomb was born on August 23, 1950, in Buffalo, Minnesota to Marshall and Jeanette
Whitcomb. The family lived in Rockford, Minnesota during her early years. After the family moved to Buffalo, Vida graduated from Buffalo High School in June 1968. Vida attended the University of Minnesota, where she earned a Bachelor of Education Degree in June 1972. Vida was married in 1972, and in the following years lived in Boston, Los Angeles, St. Louis, and Indianapolis.

Vida suffered from depression and was diagnosed with Bi-polar Disorder in 1985. This devastating disease caused the break-up of her marriage and family. She endured this terrible disease for the remainder of her life.

Despite her own battle, Vida was involved with mentoring and advocating for her peers. During a nine-year respite from manic episodes, she used her skills as a teacher and educator with the Northeast Recovery Learning Community. Vida served as a counselor for the “Peer to Peer” Program and was a speaker for the “In Our Own Voice” Program. Her positive and empathic personality was a blessing to others.

Vida loved to travel and had the opportunity to visit places such as Asia, Europe, and the Middle East. More recently, she made a Catholic pilgrimage to Northern Spain and Fatima, Portugal where she saw Pope Francis. Vida loved to share the pictures from her travels with her friends and family.

Vida is survived by her daughters, Michelle Ng, Jennifer Kravitz, Christina Rosi, sister, Joyce Whitcomb and brother, Bruce Whitcomb.
Vida followed her faith as a Roman Catholic until she was called home by her Loving Savior on March 2, 2022.