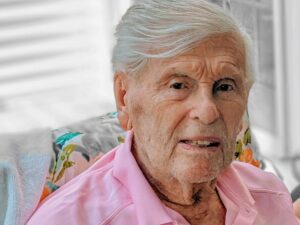 Reading, MA. Walter C. Alexander, 103, entered eternal life on All Souls Day, November 02,
2020. Walter was educated in the Northampton schools. As a boy, Walt started working in his
father’s store, Alexander’s Market in Florence, MA, before enlisting in the Marine Corps in
January of 1938. He proudly served in World War II attached to the Marine Aircraft Group
where he worked closely with the Sea Bees establishing airbases and setting up aircraft shops
throughout the South Pacific. Walter served in the Battle of Coral Sea, in New Hebrides, and in
the Solomon Islands, and was Honorably Discharged in January 1946, with the rank of Chief
Warrant Officer.

Walter was the son of the late Joseph and Olympia Alexander. In 1949, Walter married his wife
of 65 years, the late Genevieve (Maciag) Alexander. Together they raised 5 children in Indian
Orchard. Robert and his wife Janet, Peter and his wife AnnMarie of Wilbraham, Joanne Iapicca
and her husband Pat of Reading, MA, Leslie of Bolton, and Maryann of Ridgefield, CT. Along
with 7 grandchildren, and 4 great grandchildren. He was predeceased by his 4 brothers, Stanley,
his twin Maurice, Edward, and John Alexander, all of Northampton, MA. In addition, he leaves
behind several nieces and nephews.

Following his military discharge, Walter worked for 28 years in the Instrumentation and
Electrical Shop, at Westover Air Force Base. He later worked for over 8 years at Kollmorgen in
Northampton, MA, in Quality Assurance; until his retirement in 1982.
Walter’s passion was his family, airplanes, the Boston Red Sox, and vacationing in his winter
home in Citrus Springs, Florida. He loved projects that kept him busy and spent most of his
golden years working on his children’s and grandchildren’s endeavors.

In 2017, Walter was presented the “Purple Cane Award”, as the oldest resident of Indian
Orchard.

A private Memorial Service will be held at the Massachusetts Veterans’ Memorial Cemetery in
Agawam, with full military honors. In lieu of flowers, memorial donations may be made to
Compassion Care Hospice, Woburn, MA or the Semper Fi & America’s Fund.