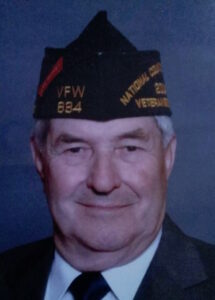 Walter served honorably and was highly decorated for 20 years of military service throughout both the Korean and Vietnam War eras. After his military career, Walter gave nearly 50 years of service to the Veterans of Foreign Wars, fighting for veterans’ rights and benefits. He served District 18 as Quartermaster for 20 years and became Commander. He went on to become State Commander (93-94) and also served on the National Council representing Massachusetts and Vermont (04-06). In addition Walter was the National Chief of Staff (2011-2012). No person was more dedicated to the VFW or its members.

Walter truly enjoyed serving as Chairman for the Canton Children’s Hospital Annual Christmas party for over 20 years. In lieu of flowers donations can be made to the Canton Children’s Hospital Christmas party in Walter’s name at MHSF Christmas Party Fund, 3 Randolph St., Canton MA 02021. Or simply call your local Congressman or Senator and ask that they do more for our veterans. The family is planning a quiet burial at Massachusetts National Cemetery, Connery Ave., in Bourne, MA with full military honors on July 21, 2016 at 11:30am.