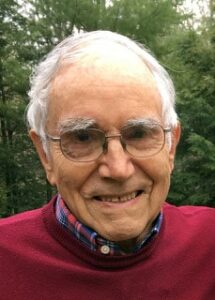 Born in Old Town, Maine, Walter was the son of Lynwood and Lucile Hatch. He graduated
from Old Town High School and earned degrees in chemical engineering from Worcester
Polytechnic Institute and Massachusetts Institute of Technology. He worked for Exxon
Corporation his entire career, mostly in the central engineering group in New Jersey,
handling the planning, design, and operational follow-up of oil refining and petrochemical
plant processing equipment. His work included assignments of two years in The Hague,
Netherlands, and four years in London, England, both of which generated special
memories for him and his wife, Carolyn, and their daughters. Well-respected in his various professional roles, he was also the go-to person for the entertainment segment of his co-
workers’ retirement parties, often cleverly adapting show-tune lyrics to fit the honoree. After his own retirement in 1986, he and Carolyn moved to Bethel, where they had already
been enjoying golf and ski vacations for many years.

Walter was active—in some cases into his nineties—in many Bethel-area organizations,
including the West Parish Congregational Church, Mahoosuc Land Trust, Bethel Historical
Society, Bethel Rotary Club, Bethel Conservation Commission, Western Mountains Senior
College, Androscoggin Home Healthcare & Hospice, Maine Handicapped Skiing, and the
District Exchange. For many years, he also tutored students and coached Odyssey of the
Mind teams in local schools. Lasting projects in which he played an instrumental role and
found particular satisfaction were the Mount Will Trail, the Bethel town clock, and the
church’s memorial garden.

Walter had a wide variety of hobbies and interests. Outdoors, he enjoyed golf, tennis,
skiing, hiking, canoeing, and gardening. Indoors, he liked chess, puzzles of various kinds,
TV sports, and reading. He also played the piano, and his family fondly remembers the
months he spent learning Rhapsody in Blue. In recent years, it was a regular highlight of
his week to volunteer on community carpentry projects with the church’s Congo
Craftsmen, enjoying the camaraderie and providing the doughnuts each week!

In his approach to daily life, Walter was notably even-tempered. He willingly took on
responsibilities, with a spirit of good will and a desire to be purposeful and productive. He
was practical, organized, resourceful, diligent, and dependable. If something needed to be done, he just did it—the church’s financial records, projects around the house, egg-
cracking for Rotary community breakfasts, whatever the need. He was patient, kind, supportive, and accepting of others. He had an engaging sense of humor and was a
masterful joke-teller. He was a man of integrity, with a strong moral compass. His quiet faith was central to him; he worshipped and served actively in church communities
throughout his life. He appreciated the blessings in his life and gave generously of his
time, talents, and resources to bless others, all with a steady “perfectly normal” manner
that did not call attention to itself. He cherished his wife and family and was most content
enjoying simple pleasures with them. He lived well, loved well, and was well loved.

He is survived by his five daughters and sons-in-law, Dorothy and David Seiter of
Hamilton, MA, Joan and Jack Kendra of Hatfield, PA, Barbara and Kim Kubach of Johns
Creek, GA, Lauren and John Rowe of Hamilton, MA, and Marjorie and David Lebowitz of
Ipswich, MA; twelve grandchildren; and eight great-grandchildren. He was predeceased by
his wife of 66 years, Carolyn, and his brother, Robert Hatch.