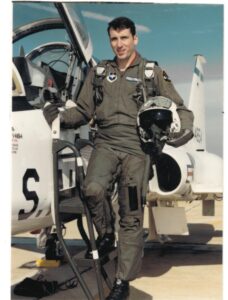 Captain Warren Patrick Breeding, 57, Jet Pilot, of Gouldsboro, ME most recently of East Granby, CT, formerly of Parker, CO, as well as Plano and Houston, Texas, Oklahoma City, OK and Slidell, LA has taken his last amazing FLIGHT on Christmas morning, December 25, 2018….likely his BEST flight ever (greasing it on… knowing him) to his eternal destiny!

This amazing, strong man, funny, very brave and courageous head and neck cancer fighter, who kept his sense of humor throughout several battles and who was a remarkable survivor (multiple times over,) stayed in control until the end, like a great Captain, passing away peacefully on his own terms, with his loving family and his yellow lab, Kaylee, by his side, at the Kaplan Family Hospice House in Danvers, MA. He was given the greatest gift of all in this wonderful journey, free from all of his pain and suffering: PEACE!

Warren Patrick, who went by his middle name “Pat” during his childhood and schooling years, is survived by his devastated wife, Deborah, and their two loving sons: William Patrick and Scott Alexander Breeding; brothers, Steven, James and his wife Tiffany; nieces Tessa and Cara, his uncle Alan and Aunt Kathy. He is also survived by his loving mother-in-law Margaret Laws (nee Dehler) of Ottawa, Canada, also known as “Grandma Margaret”, who never forgot his Birthday of Jan 11 th every year, his very thoughtful sister-in-law Mary Eady of Victoria, British-Columbia and her son, his nephew Jonathan Eady. Also, he was brother-in-law to James & Anne Laws, of Ottawa, Canada, Louise & Doug Lee of Surrey, BC, Canada, Margaret-Anne Laws & the late Greg Walsh of Perth, Ontario, Canada, David Laws, Carolyn Laws of Canada. and many, many nieces and nephews on the Canadian side of his family that are unmentioned here in this obituary, but who he cared for very much.

He was born in Houston, TX and lived an adventurous upbringing with his late parents William Preston and Margaret Ann (Hunt) Breeding and his brothers Steven Paul and James David when his father’s engineering career took them all traveling around the world, exploring many historic places, and living in several countries including Africa. In Lagos, Nigeria he attended the American International School from ages 9-11 years. In Lybia, El Salvador and Nicaragua before moving to Slidell, LA where he attended high school, played on the football team as a tight end and later worked on an oil rig off the Gulf Coast. It was when he lived in Nigeria that Warren became very captivated with flying in a small airplane. From that moment on, he knew that he wanted to become a professional jet pilot. After graduating from College with a Bachelor’s Degree in Computer Science and then a Master’s Degree in Business Administration from Louisiana Tech University, he followed his strong interest true heart and passion for flight and pursued his dream of a flying career through the ROTC program and the United States Air Force.

He became an Air Force Officer and was very proud to serve his country, the USA. He consistently demonstrated not only exceptional flying skills and ratings as a Military pilot, and was known as a “great stick” who always “greased it on,” he was a consummate professional whose aircraft systems knowledge was second to none, he was gifted with a remarkable memory that recalled details of any and all aircraft systems instantly and his brain permanently retained this information.

He was an avid and skilled sportsman who enjoyed a lot of boating, waterskiing, tubing and wakeboarding on many lakes in Oklahoma, Texas, New York, New Hampshire and Maine. He has hiked nearly every trail in Acadia National Park and our neck of the woods on the Schoodic Peninsula. He was a great golfer and an awesome bowler. He loved spending time at home with his family when he was home from work trips and on family vacations all over. He was an amazing sandcastle, snowman, playdoh and ego sculpture builder. He helped coach Little League Baseball for his sons’ teams, playing ball and pink pong and tennis with his boys, collecting sea glass on the beaches in Maine and making sea glass pictures and writing stories. He loved doing woodworking projects around the house, walking our dogs, playing many family games, jazz music, going out dancing with his wife and particularly the Savage Brother’s Band events, was a self-taught piano and drum player and really enjoyed telling stories from his head at night time to his boys. He loved to read science fiction and physics books particularly related to flight, and anything Star Trek and Star Wars, watch action movies with his sons but tolerated chick flicks with his wife, did daring and adventurous things with his boys like all the scariest roller coaster rides at theme parks, rock climbing and sky diving, and relaxing things too lie making puzzles, listening to music and watching Sunday football. He is a huge New Orleans Saints fan and really hoped that they would go to the Super Bowl in 2019.

Warren believed in living life to its fullest, finding just one thing that you are good at doing and love to do and following your heart. He was a fan of work hard play hard, and he certainly was good at both of these! He fostered the principles of integrity, responsibility, reliability, grit and honor, and to have fun! Life is too short, so be in your happy place!

Friends and family are asked to attend and everyone is welcome to share in happy memories, in a Celebration of the Life of Warren Breeding at the New England Art Museum in East Granby, CT in the Military Hangar of Tuesday, January 8, 2018 from 6-9pm with light refreshment and hors d’oeuvres.

Formal ceremonies for burial of Warrens ashes will take place in Arlington National Cemetery, Washington D.C. in the spring of 2019. Dates to be determined.

In lieu of flowers, please make any donations you choose to the American Cancer Society Head and Neck Cancer, as well as the Make A Wish Foundation for those suffering with cancer. Thank you.