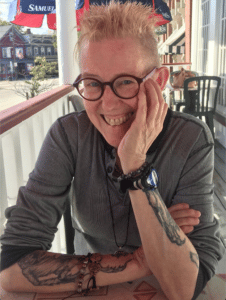 Wendy L. Stone of Woburn, MA, died of complications from a four-year battle with ovarian cancer on September 6, 2022, at home and surrounded by those who loved her.

She was uniquely unapologetic in her individualism. Her nephew Logan wrote to her: “I hope you know how you, being relentlessly yourself, inspired me to be more of myself. I hope you know your passion drove me to find things I’m passionate about too.”

In the 1960s, Wendy played guitar in the “Daisy Delegation,” an all-girl R&B band based in Reading, MA. In the late 1970s/early 1980s, she was the lead guitarist and bassist for the all-female, no-wave, punk art band “Bound and Gagged,” which released an album on Modern Method Records. Her love of music continued after she stopped performing. She found great happiness in discovering new genres and bands and built an extensive, eclectic collection of music made by artists from around the globe.

In the early 2000s, Wendy became a prolific mixed media artist and showed her artwork at Harvard University as well as Roslindale Open Studios. She was an award-winning artist and member of the Woburn Guild of Artists.  An avid tabletop gamer who painted historic and fantasy armies, she attended the Maine Historical Wargamers Association’s Huzzah! gaming conference every year and also gamed at the Hobby Bunker and Mid Gard.

The home that Wendy created with Amie was a living art installation, a cabinet of curiosities. Her passion for living and delight in small joys combined with her artistic flair flavored every morsel of the life she made for herself and selflessly shared with others.

As her nephew Bobby stated, “You could look at nearly any aspect of her life and find yourself in awe of the courage of this woman, to stake a claim on her place in a world that often refuted it.”

Wendy was the eldest daughter of Robert and Barbara (Woodbury) Stone of Reading, MA.  She was born on October 26, 1954–the same year as Godzilla, as she used to say. A 1972 graduate of Reading High School, she earned a BA in photography from Mass Art in 1976.

Wendy retired in February 2021 from the Mass Medical Society/New England Journal of Medicine (Waltham) where she worked in the shipping and receiving department. Prior to that, she was a manager at Upper Newbury Pet (Back Bay) and a co-owner of Peaceable Kingdom pet store (Jamaica Plain). Before moving to Woburn, she lived in Roxbury, MA, for many years.

Wendy is survived by her wife of 25 years, Amie M. Evans; her sister, Linda (Stone), and brother-in-law, Greg Moore; her nephew, Logan, and his partner Marie Knight (Bethlehem, NH); and her nephew, Bobby, and his wife, Ami, along with their daughter, Alivia Rose (Framingham, MA); as well as her beloved pets, GoGo, Horus, and Haggis.

Wendy was deeply loyal to the people she considered family, cared about, and held close. She touched the lives of many, but her closest friends were Susan and Roxanne McDonough-Hintz (Fitchburg, MA); Barbara Britto (North Carolina); and Christine Helsel and Jana Gabarro (Reading, MA).

The family wishes to thank everyone at Winchester Cancer Center who cared for Wendy over the last four years and made her difficult journey easier, particularly Janet, Rebecca, and Mary.

There will not be a funeral, but a memorial celebration will be held on October 29 from 2:00 pm to 5:00 pm with an open remembrance sharing at 3:00 pm in Concord. Please email Christinehelsel@gmail.com for the address of the celebration.

In lieu of flowers, the family requests donations be made in Wendy’s name to one of the two charities she supported: Saint Jude Children’s Research Hospital or Northeast Animal Shelter (Salem).