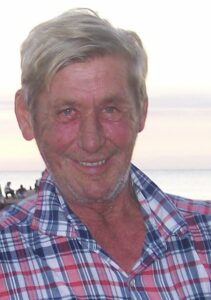 William C. “Billy” Shawno passed peacefully on December 17, 2014 with his family by his side following a sudden turn for the worse. He arrived in this world on January 4, 1953 and lived life in the Bay View section of Gloucester. Billy lived a simple and unconventional life. He loved the woods, the quarries, his cars, his beer, and watching thunderstorms and stars, fireworks and bonfires. He respected life and family, cared for animals, enjoyed a swift boat ride on a hot summer day and relished his travels with Mary and Al. He watched people come and go from the junkyard and could usually be persuaded to fix anything for anyone. Extraordinarily talented, he could repair any engine, build a house or stone wall, weld a truck or construct a stove; he could make his Digger dance. His gentle side shone when he held his newborn son to his chest and later taught his daughter how to plant and tend a garden. Billy is survived by his son, William C., Jr. of Malden and daughter, Ashley M. Shawno of Gloucester; his niece, E. Marie Shawno of ME; and many cousins, including Gino and Tammy Balzarini of ME; and numerous friends, especially Mary and Al George, Paul Blanding, Jake O’Hanley, Glen Rose, and Ricky Balzarini, who filled his life with time and love. He was predeceased by his parents, William H. and Helen E. (Palmer) Shawno and his sister, Jessie Marie. ARRANGEMENTS: In accordance with Billy’s wishes, there will be no services; a memorial celebration of his life will be announced at a later date. The family is being assisted by Boston Cremation of Malden and Billy’s ashes will be interred with those of his loved ones. Messages of condolence may be left at http:// www.bostoncremation.org. Donations in his memory may be made to the charity of one’s choice.