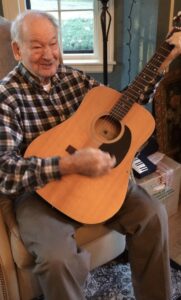 William David Jones, 95, longtime resident of Campbellsville, Kentucky, departed this world on October 8, 2021 in Belmont, Massachusetts while holding his daughter’s hand and listening to “O, Come, Angel Band,” the song his own grandmother was singing at the time of her passing. In the days prior to David’s passing, he was surrounded by family and friends who sang and

played instrumental music to celebrate his long and wonderful life with him.

David was born January 22, 1926 in Green County, KY to loving parents, Henry Milton Jones, Sr. and India Maude McCubbin Jones, and was the second child of five and the oldest of four sons. One of his most memorable childhood events occurred at age ten when he drove a herd of sheep for eleven miles to a farm outside Campbellsville in Taylor County where he spent the rest of his boyhood.

David will be remembered as kind, gentle, accepting of everyone and at home wherever he happened to be; he always shared a calming, positive, yet humorous outlook on life. At the dinner table he was an enthusiastic storyteller recounting Mark Twain-style vignettes of growing up on a farm without electricity or plumbing and attending a one-room schoolhouse during the Great Depression. A favorite recollection was the time he and a younger brother, having been instructed to dig a hole and relocate the privy, decided to reduce their digging labor by purchasing dynamite at their local general store.

Following graduation from Campbellsville High School, David joined the US Army and served during World War II. He was stationed in Japan during the occupation and his duties included guarding General Douglas MacArthur and providing courtroom security during war crime trials. After his honorable discharge, David attended Campbellsville College and met his lovely wife,

Johnette, at the local radio station. They married on Christmas Day 1949 and David became a loyal employee of Tennessee Gas Pipeline Company for forty-two years. He worked in several states including a twenty year residence in Louisiana, but upon retirement moved “home” to Campbellsville, KY.

True to the family values instilled in all the Jones children, David was very active in service to others. He was a faithful servant in his church, a past president of his local Kiwanis Club, and a member of other volunteer groups. He spent much free time helping neighbors and strangers alike with anything from delivering meals and supplies, making repairs, chopping wood, or even removing a swarm of bees. As a hobbyist he was a gardener, a beekeeper, a square dancer, a crossword puzzle aficionado, and most significantly, a musician. He played guitar and sang bluegrass, gospel, and folk music along with his wife Johnette. With a beautiful voice and a song for every occasion, he loved sharing his joy of music by performing weekly at local nursing homes and senior centers until the Covid pandemic of 2020.

In addition to his parents, David was predeceased by his son David Neal, his sister Louise Mings, and two brothers, Vontress Jones and Henry Milton Jones, Jr.

David is survived by Johnette, his wife of nearly 72 years; his youngest brother Lieutenant General (Ret) Donald Jones and wife Betty of Killeen, Texas; his daughter Lisa Jones M.D. and husband Gottfried Schlaug M.D. of Belmont, Massachusetts and his daughter-in-law, Gwen Jones of Natchitoches, Louisiana. David also leaves behind three granddaughters Carol Ann, Annalise, and Amara, beloved nieces and nephews, as well many other relatives and friends. He leaves a legacy of love, joy, and respect.

A celebration of David’s life will be held at a later date in Kentucky and family and friends will be notified. Memorial donations should be directed to a favorite charity or a local food pantry.