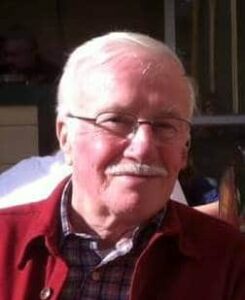 William John Meserve of Nashua, NH, passed away peacefully on Friday, May 24, 2019 at the age of 79.
He left this earth surrounded by his loving children after a rapid but courageous battle with cancer.

Bill was born in St. Johnsbury, VT, the eldest child of Charles William and Helen Catherine (Ryan)
Meserve in October of 1939. His childhood occurred largely in Concord, NH, until he enlisted in the
military at the age of 18. The US Airforce would prove to be a transformative experience for him,
particularly his service as a morse intercept operator in Japan where he immersed himself in the region’s
culture. He subsequently returned to the U.S. with a thirst for knowledge and an acceptance letter to
the University of California. He graduated from UC-Berkeley in 1967 with a Bachelor’s degree in
mathematics, a year spent in Hong Kong, and Phi Beta Kappa honors. Shortly thereafter, he began a 20+
year career at the Digital Equipment Corporation as a computer programmer and software engineer,
first in southern CA, then in NH and MA. During this time, he met and married Diane Nixon, and
together they raised three children primarily in Carlisle, MA. Many family weekends were spent at a
vacation home he built in Poland, ME with his closest friend. He subsequently lived and worked as a
software consultant in the Boston area for roughly a decade. After fully retiring, he lived in Loudon, NH
and finally Nashua. His hobbies included woodworking, international travel, sailing, and continuing
education; all of which was secondary to time spent with his children, and later, his grandchildren.

Bill is survived by his sister, Maryann Meserve of Titusville, FL; son, Trevor Meserve and partner Kirsten
Hirschler of Littleton, MA; son, Ryan Meserve and wife Rose of Chelmsford, MA; daughter Nichola
Meserve and husband Michael Bean of Reading, MA; and nieces and nephews. He was the beloved Papa
to six grandchildren: Caeden, Scarlett, Cooper, Spencer, Evan, and Cameron. Bill was preceded by his
brother Robert Meserve and his wife Ann of Sun City, CA. He will be laid to rest beside his late parents.

A burial service will be held on Friday, June 7 at 10:30 am at Blossom Hill Cemetery in Concord, NH,
followed by a nearby memorial gathering. Family and close friends are welcome to attend. In lieu of
flowers, consider sending a donation to the Care Dimensions Hospice House in Lincoln, MA or your
favorite charity, in Bill’s name. He is irreplaceable and will be loved indefinitely.