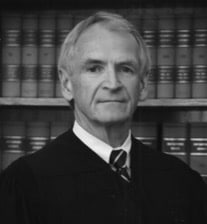 Following law school, Bill began as an associate at the Leonard Firm in Nashua, NH. He fell in love with trial law which eventually lead him to start his own practice. He was sworn in as an Associate Justice of the Superior Court of New Hampshire in 1987. Bill greatly enjoyed being a judge and was well respected by his colleagues. He retired in 2010.

An active member of his community, Bill was on the board of directors at the Nashua Area Committee on Child Abuse and Neglect, The Girls Club of Greater Nashua, and Scott Farrar Retirement Community in Peterborough. He was on the planning boards of both Temple and Peterborough, and various NH Bar Association and Superior Court committees.

Bill loved to travel, but especially loved his home in New England. He loved the outdoors: running, playing softball, hiking and skiing as often as the weather would allow. He had a profound love of literature that helped shape his perspective on the world. He was a witty conversationalist, and loved to have healthy debates with his friends, who often held opposing views. He was thoughtful and kind, sometimes silly and always fair. He was a man of great integrity. He is loved deeply by his family and friends and will be sorely missed.

He is predeceased by his parents William Joseph Groff and Helen Hull Groff and sister Linda Allen. He is survived by his wife Susan Natorp Groff, daughters Elizabeth (Michael) Colgan, Abigail (Keith) Hernandez, and Annie Groff (Ben Schmerler), and 5 grandchildren, his sister Galla Howes and many nieces and nephews.

Memorial Service will be held at the Temple Congregational Church, Saturday January 11th at 2:00pm, followed by a reception at the Temple Town Hall. In lieu of flowers, donations may be made to the ConVal Scholarship Fund.