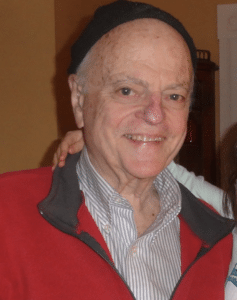 William K. Goodwin, Jr. of Winchester passed away on Sunday, March 27, 2022 at the age of 88. Bill is survived by his wife, Nancy (Hall) Goodwin, his daughter Elinor and her wife, Carol, his daughter Phoebe, and his granddaughters, Julia and Rose.

Bill grew up in Marblehead with his parents Ruth (Elder) and William Goodwin and his brothers Daniel Goodwin and the late Randolph Goodwin.  He graduated from MIT in 1957 and spent the next several months in Italy studying architecture on a Fulbright.

Bill worked at Cambridge Seven Associates, Vanderweil Engineers, and Ellenzweig Associates.  He spent his career designing laboratories, aquariums, MBTA stations, and hospitals, merging his love of architecture with his deep understanding of the science that makes such spaces work. He worked with the professors and the board members, but was never happier than when he was interacting with the workmen and learning the tricks of each of their trades.

He kept lists of absolutely everything and never stopped trying to teach himself new things. He was a huge fan of Gilbert and Sullivan operettas. He was an active member in the SIA (Society for Industrial Archaeology), and he spent 50 years trying to form right angles in an old house in Winchester that was neither plumb nor level.

The Memorial service will be held on Saturday, April 2, 2022 at 2:00 PM at The First Congregational Church in Winchester. A private burial will be held at Waterside Cemetery in Marblehead.  In lieu of flowers, please consider a donation to The Massachusetts Audubon Society.