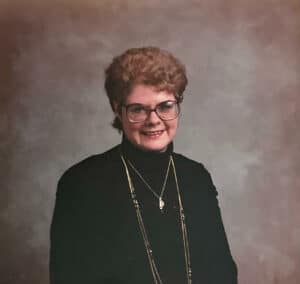 79, of Lynn, Massachusetts, passed away on Monday November 21, 2022 after a long period of declining health.  She was born on April 24, 1943 in Biddeford, Maine, and was adopted by James and Margaret Rollinson.

​Sheila was a graduate of St. Mary’s Girls’ High School in Lynn, and Salem State University.  She went on to further her education, earning a Ph.D. in Education from Nova University.  Sheila was employed by the City of Lynn School Department where for many years she was the Director of Information Systems.

​Sheila loved her Westies rescue dogs and loving companions, Brutus, Jack Frost, Nina and Luna.  She resided for many years in Wenham, MA, and then lived in a 55 and older community in Lynn.  She was, for a time, treasurer of their neighborhood association.  Sheila enjoyed walking the neighborhood with her dogs, and visiting friends.

​Sheila was a devoted and generous Christian who loved telling others about faith.  She was quick to offer words of hope and encouragement to others experiencing difficulties in their lives.  In later years, she communicated through emails as she became more confined to her home.  Sheila’s faith gave her the courage to go on after the devastating loss of her husband Kevin.

​Sheila is survived by her children from her first marriage to George M. Hoefle, Sheila Elizabeth (Hoefle) Fredericks and James Michael Hoefle, and their families.  Sheila was married for many years to the late J. Kevin Astuccio, and she is survived by Kevin’s sons Joseph and Kevin and their families.  In addition, Sheila is lovingly remembered and missed by many dear friends, neighbors and colleagues from the Lynn Public Schools Department.

​Sheila’s Funeral Mass will be held on Monday, December 19, 2022 at 10 AM at Our Lady of the Assumption Church, 17 Grove St., Lynnfield, MA.  Burial will take place at a later date.