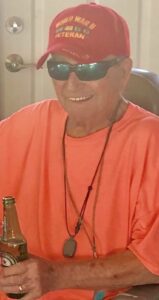 South Hadley, MA — Alan K. Root, 97, took his final breadth on Sunday
morning, July 12th, 2020, with his daughter holding his hand and his grandson, who took care of him,
gripping him in a hug, with friends at his side, in the home he built over 69 years ago.

Alan was born on July 9th, 1923, in Burlington, Vermont, to his parents, Henry and Eva Root, and his
beloved grandparents, who raised him, Francis and Rose Cherrier of Fairfax, Vermont. In 1942, Alan
enlisted in the U.S. Marine Corps willing to fight and defend his beloved America against its enemies. In
World War II, he served in the South Pacific where he earned two Purple Hearts. He was a member of the 3rd Raider Battalion, the first Provisional Brigade, and the 6th Division. He participated in action against the enemy in Guam, Bougainville, B.S.I., and the Marianas Islands.
When Alan returned from the war, he worked at Uniroyal Tire in Chicopee and was a union steward
representing his fellow worker’s needs. He later became Manager of St. Patrick’s Social Center, South
Hadley, for 30 plus years. His most cherished yearly event was the St. Patrick’s Corned Beef Dinner. He
also loved running their Friday night bingo. He was an active participant in politics in his community,
serving as selectman, and also as a member of the Board of Health for many years.

On July 9th, 1945, his 22nd birthday, he married his Irish bride, Patricia (Patsy) Wynne of Hungry Hill,
Springfield, MA. They bought land and he began building their home in South Hadley in 1951; there
they began their American Dream and raised their four children to make that dream a reality: (Alan)
Kenneth, Jr., Thomas, Michael, and Mary. The joy of “Grampa’s” life was his ten grandchildren: Shaun
and Christopher Root; Kateland, Alan Kenneth the 3rd, Harrison, and Lilly Root; Micah Root Brown; and Molly, Kellen and Devin McCaffrey; and, his one great grandchild, Leah.

Alan’s wife of 60 years, Patricia, passed away on September 12th, 2005. He was self-sufficient for many
years, living on his own; but his life was enormously enriched by the help, support, caring and love of his
special neighbors. His grandson, Kellen, lived with him the last year and a half of Alan’s life, and became
his right hand. Together they celebrated the joy of each day; whether planting a garden which Grampa
watered twice daily, or racing down the road… one on a skateboard and the other an electric scooter to
visit the neighbors! Alan attributed his long life in recent years to the attention he received from “My
two great doctors…” Dr. Scott McCaffrey, his son-in-law and Dr. Kellen McCaffrey, his grandson… both
veterinarians.

Alan was happiest at his home when his family, neighbors and friends visited him. He loved to sing
songs from his youth, Johnny Cash songs, or his favorite Irish music, sung with a brogue. If you heard
him sing a rendition of “Goodnight Irene” you knew it was time to call it a night. He enjoyed working
outside and taking care of his home and property, and especially loved watching nature through his
family room windows… the birds, squirrels, rabbits, deer, fox, and even the occasional bear. His legacy
is his love of life each day and his positive attitude which sustained him through the difficult process of
ageing. His body aged, but his mind was “sharp as a tack” ‘til his final breath.
The family will have a private celebration to honor his life as father, grandfather, and friend. Donations
may be made to the South Hadley Council on Aging on his behalf.

He left his beloved home, covered in the America flag with the Marine’s Hymn playing proudly.
Semper Fi