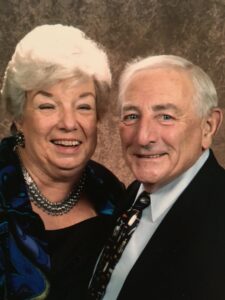 Albert David Rossin, most recently living in Newton, Massachusetts, died on April 7, 2020. He was Dave from the beginning, born on May 5, 1931 in Cleveland Heights, Ohio, the only son of Freda (Hershenow) and Maurice Rossin. Dave graduated with a BS in Applied and Engineering Physics from Cornell University in 1954. His studies took him to the Massachusetts Institute of Technology (MIT) where he earned a masters in nuclear engineering in 1955, to Northwestern University for a MBA in 1963; and to Case Institute of Technology (now Case Western Reserve University) for a Ph. D. in metallurgy in 1966. He spent the early years of his career in research at Argonne National Laboratory and joined the American Nuclear Society in 1955. He became an ANS Fellow and later served as the society’s President (1992-1993).

Sandra Howells Rossin, most recently living in Newton, Massachusetts, died on April 10, 2020. She was born on August 4, 1937 in Cleveland, Ohio, the only child of Thelma (Sherman) and James Howells. Sandy attended Kent State and then entered St. Luke’s School of Nursing in Cleveland. After graduation, she worked at St. Luke’s Hospital and loved emergency room nursing most of all. Sandy continued her nursing studies at the Ohio State University, graduating with a BSN in 1963.

She met Dave Rossin at a mixer at Case and married him on July 16, 1966 – just after Dave completed his PhD. They soon departed on a magical six week honeymoon/business trip to Africa and Egypt – making memories and recording movies that they would one day share with their daughters and many others.

Dave and Sandy started their married life in Chicago, Illinois on the 20th floor. Dave worked with Commonwealth Edison Company for almost ten years. Sandy taught medical terminology and ran her own business. After having daughters Laura Ann and Elizabeth Lynn, they moved their family to Naperville, Illinois. The family enjoyed friends and neighbors in their large back yard, at the bandstand, at the congregational church, at school functions, at fields and parks, at home and on the road. Sandy was an active member of the American Association of University Women, serving as president of the local chapter among other roles. Dave and Sandy were involved with their alumni associations and almost never missed a Cornell Reunion – or any other reunion if possible. They were always ready to welcome a visitor, a traveler, and set another place at the table. Dave had an infamous cheese fondue recipe and Sandy made an amazing spaghetti sauce that could serve thousands.

In 1981, Dave and Sandy moved their family to Los Altos Hills, California where they stayed for 20 years. Dave was Director of the Nuclear Safety Analysis Center at the Electrical Power Research Institute for five years, then he was appointed by President Reagan as Assistant Secretary for Nuclear Energy at the US Department of Energy. After he departed DOE in 1987, Dave started Rossin & Associates and worked as a consultant while drafting the broad strokes of a book about the Carter administration’s decisions on spent fuel reprocessing. He served on the Diablo Canyon Independent Safety Review Committee and was a Center Affiliated Scholar at the Center for International Security and Cooperation at Stanford University. While in California, they remained active with alumni associations and among other pursuits, Sandy worked at the local high school where she was recognized as “mom” by her daughters’ friends who treasured her excellent hugs, listening ear and Triple Chocolate Cake.

At a certain point, it was clear that these Midwesterners were ready to retire to Florida. They found a (first) house in University Park (UP), a community in Bradenton, near Sarasota. Dave and Sandy joined the UP Country Club, became active with the Cornell Alumni Club of Sarasota (Hospitality Committee of course), and were active members and regularly hosted visitors at the Ringling Museum. Dave golfed more than Sandy did. They bought a bigger house in the community when the grandchildren started to come along. Sandy sang with the UP “Park Larks” and served as Membership Chair with the UP Women’s Club. Dave occasionally spoke about nuclear power and often discussed baseball – including attending minor league and spring training games. While both remained lifelong Cleveland Indians fans, Dave enthusiastically followed sports teams wherever they were living. Over their 17 years at University Park, they rarely missed Friday evening at the Club, where they enjoyed gathering with friends and neighbors. Sandy and Dave made many new friends, reconnected with longtime friends, and travelled nearby and abroad.

Sandy and Dave have five grandchildren in Massachusetts and California. They loved attending games and shows and holiday gatherings from coast to coast. They are predeceased by their daughter Liz Laats (2015). Liz’s husband Andy and grandkids Margo, Gwen and Dru live in Encinitas California. Daughter Laura Van Zandt lives in Wellesley Massachusetts with husband Peter and grandkids Jenny and Will.

In October 2018, Sandy and Dave moved to Needham Massachusetts to be closer to Laura. They enjoyed the change of seasons and made friends at One Wingate Way; then later resided at The Falls at Cordingly Dam in Newton Massachusetts.

Due to the coronavirus, a memorial will be scheduled at a later date at a location to be determined. There will be talking and sharing photos, music and laughing, eating and drinking, and lots of hugging, just as Sandy and Dave would want it.

Until then, consider honoring their memory by supporting the scientists and healthcare professionals who are working every day to fight this and other diseases, ensure equity and access to care, and create solutions to our ever increasing energy needs.