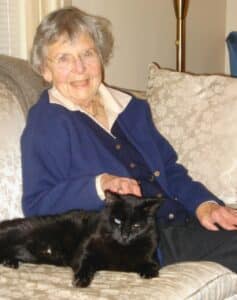 Barbara Swearingen Noland passed away at Carney Hospital in Dorchester, MA
on January 10, 2023. She was born in Orlando, FL in 1926 to Thomas Johnson and
Inez (Trout) Swearingen.

Barbara attended Union Presbyterian Seminary in Richmond, VA, then worked
as an educator at Druid Hills Presbyterian Church in Atlanta, GA. It was there she met
and married Richard Wells Noland. Together, they left for New York City where he
pursued his PhD at Columbia University. Barbara worked in the Columbia library and
The Riverside Church, and they enjoyed many wonderful years in New York, where
their son, William Eugene Noland, was born in 1963.

In 1965, the family relocated to Amherst, MA where Richard worked his entire
career as a Professor of English at the University of Massachusetts. Barbara pursued
her passion for working with children at Wildwood Elementary as a teacher’s aide, as
well as the Unitarian Universalist Society of Amherst and the First Churches of
Northampton. Her training as an educator, combined with her natural talent and love for
the theater, made her the perfect person to direct plays, Christmas pageants, and other
activities that brought joy and excitement to the lives of countless young people and
their families. Later, Barbara brought her inimitable Southern charm to her role as
receptionist at National Evaluation Systems in Amherst.

Barbara traveled extensively in the United States and Europe, including an
especially memorable year in Germany while Richard was an exchange professor at the
University of Freiburg. She loved the two family dogs, Duke and Sigi, and was also a
loyal supporter of the Red Sox, Celtics, Bruins, Patriots, and all the University of
Massachusetts sports teams. Her lifelong passion, however, was working outdoors in
her garden, both at her home in Amherst, and later in her residence in Quincy. She
received many compliments for her lovely flower and landscaping arrangements, but
always privately said, “I’m lucky people don’t see all my experiments that didn’t work!”

Barbara leaves her son, William, and his wife Madeleine (Woodcock) Noland,
and the families, children, and grandchildren of her brother, Eugene Swearingen, her
sister Iris Beidler (Swearingen), and her brother-in-law, William Knight Noland. Barbara
also leaves the many friends, colleagues, and students whose lives she touched, and
who ultimately made hers so rich and fulfilling.

In recognition of Barbara’s love for her two dogs, her son and daughter-in-law’s
cats, and all animals, memorial donations can be made to Dakin Humane Society, P.O.
Box 6307, Springfield, MA 01101 (online: dakinhumane.org) or to Quincy Animal
Shelter, P.O. Box 690088, Quincy, MA 02269-0088 (online: quincyanimalshelter.org).