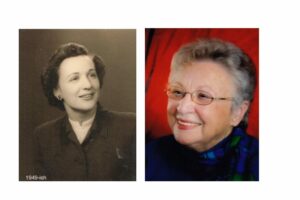 Bernadette C. McNeill passed away peacefully in her 98th year on the morning of August 17, 2022 with the love of her family around her. The 3rd of 6 children, she was born on March 22, 1925 in New York City to Cornelius D. Curtin and Edna (Riester) Curtin. Raised on Long Island, she graduated from the Dominican Academy in Manhattan, and soon started to work as a secretary for various companies in New York. She met Donald W. McNeill on a blind date, and they married a few years later in 1950, in Yonkers, NY.

Moving up to New England in the late 50’s, she raised her family, living in Danvers, Mass; Somers, CT and Billerica, MA. She retired after working many years for BASF, Inc and Dennison/Kybe in Marketing and Office Administration.

After the passing of her husband, she moved up to Ludlow, Vermont where she spent 10 years. She loved living in the community of Ludlow looking out over the mountains. She volunteered at the Ludlow Elementary School Library and the Town Library, loving the children, the teachers and always learning. She had been presented with a Volunteer Award by Vermont Senior Solutions and the entire Elementary School turned out to celebrate her 90th birthday! She always looked “sharp” wearing one of her many scarves and always with lipstick and her hair “done”.

Bernadette was predeceased by husband, Donald W. McNeill;  her siblings, Patricia Bowden, Edward Curtin, Gerald Curtin, Nathalie (Lee) Forster and John Curtin.   She is survived by her children, Donna McNeill-Hudkins (Peter) of Chester, VT; Kathy McNeill and Bernadette McNeill of Somerville, MA; Michael A. McNeill of Hollywood, Florida and Maureen Murray (Michael) of Scituate, MA. She is also survived by her grandchildren, her pride and joys – Lauren Quinn of Dorchester, MA; Peyton McNeill of Ft. Collins, CO and Maggie Murray of Scituate, MA as well as many nieces and nephews whom she loved as if they were her own.

A memorial service will be held later at the convenience of the family. In lieu of flowers, Bernadette wanted donations to go to the Ludlow Elementary School Library Fund, c/o TRSU, 609 VT Route 103, Ludlow, VT  05143    Wear a colorful scarf in her honor!