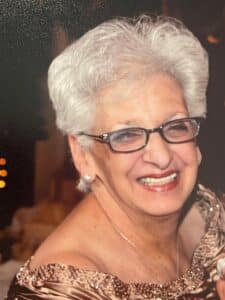 Camille M. (Cutulle) Summa – Cami to friends and family (nanny to her grandchildren) passed away Saturday August 13, 2022 at Melrose Wakefield Hospital. She had an unmatched level of enthusiasm and excitement for even the smallest thing and loved to share that excitement with all around her. She was just ten days shy of her 76th birthday. She grew up in Boston’s North End, the daughter of Albert P. and Jean M. Cutulle, sister of Rosemarie Nevano and the late Joseph Cutulle of Boston’s North End.  She later moved to Malden, where she lived the majority of her life. She will be greatly missed by her children, Gina Summa of New Hampshire and Steven and Michele Summa of Lynn, MA; her grandchildren Tiffany Summa, Steven Summa and Hailey Franklin, Destiny Summa, and Siena-Rose Summa and her great grandson Greyson Summa. The family will be holding a private memorial.