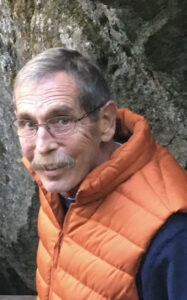 It is with great sadness that the family of Carl E. Girardin (“Carly”) announces his passing on April 24, 2020, at the age of 66 after a four year battle with Cancer. Carl will be lovingly remembered by his daughter Ashley Girardin from Chelmsford, MA., and also fondly remembered by his sister Linda and brothers-in-law/friend Richard Bregoli, his Aunt Althea and her husband, his Cousin Mark and his wife and he also shared a special relationship with Ashley’s brother Danny Pettit. Carl had 1 nephew and 1 predeceased nephew and 7 nieces who gave him 4 great nieces , 7 great nephews, 4 great great nieces and 3 great great nephews who all carried a very special place in his heart. Carl was predeceased by his father Carl V. Girardin, his mother Ruth Ann MacDonald, his eldest sister Carol Aitchison and his final love Lindy Rushton.
Born and raised in historic Concord, Massachusetts in the early 1950’s, Carl grew up in a nostalgic place that was filled with catching fireflies and frogs barefoot when it was warm and he also loved canoeing down the Sudbury River by Egg Rock. When it was colder, he loved going ice fishing with his father or going to throw snowballs at cars from rooftops on Main St. with his cousin Mark, as young boys did then. Later, as a teen, he would walk through rain, sleet or snow miles to his part-time job at Burke’s Gas Station situated on the corner of Walden Pond at the time.
Carl E. Girardin was proud to be an American and decided to enlist in the United States Marine Corps in 1972 during the Vietnam War where he became a Sergeant and travelled to places such as Japan and the Philippines. During his service he got to work on aircraft carriers at times, and he worked as an aircraft mechanic specializing on Aircraft Hydraulics and Pneumatic Mechanics in his 6 year time. He was awarded The National Service Medal, A Good Conduct Medal x2, and A Rifle Expert Badge.
Upon Carl’s return from the Marines with a honorable discharge after six years of service, he furthered his education in aviation mechanics by attending what was then known as East Coast Aerotech which was partly on Hanscom Field in Lexington/Bedford, MA. There he successfully earned his Airframes and Power Plant Mechanics license, a.k.a., his AMP license which added to his love for aviation.
Carl then moved to California in the early 1980s where he met his former wife Michelle Pelletier and had a daughter by 1983. During that time he was able to continue his passion in aviation by working for Boeing, formerly known as McDonnell Douglas in the early 1980s still as an aviation/airplane mechanic. He became a valued employee and he was offered the promotion of Supervisor. after doing this for sometime, he decided he was much happier doing the hands-on job of a mechanic.
In 2011, when he retired after 30 years, he left behind the C-17 and kept some lifelong friends.
During his time at Boeing, his on/off hours were always spent as a devoted father to Ashley. Carl also had a great love for the outdoors and flying which led him to going back to school to pursue a long time dream at Fullerton Airport, CA where he successfully earned his pilots license to fly single engine airplanes. Carl also went to ocean gear SCUBA school in Huntington Beach, California with his daughter where he became NAUI certified to dive. He loved riding his motorcycle on nice sunny days.
When Carl retired, he and his daughter moved back to his “home” in Massachusetts, a place he missed. He then spent time as a member of the Concord Rod and Gun Club and was part of a trap league in the A division and was also a member of Nashoba Sportsman’s Club.
He loved his chocolate frappes from Kimballs Farms and later helped feed the geese and goats for them out of his own love for animals. He enjoyed kayaking, his own animals, keeping in touch with some very special California friends, spending time with family, working with his hands, being in the yard, and enjoying his retirement in Massachusetts and New England.
Known for his humor, willingness to offer a helping hand, generosity, being a proud Marine, animal lover, and his undying commitment to his family and friends, Carl is loved and will be missed by all.
Due to the need for social distancing, a memorial service will be held at a later date.
In lieu of flowers donations can be made to a GoFundMe account on FB set up for Carl’s burial services. Any remaining funds will be donated to the MSPCA in his name. Please use the below link and enter it into your regular search bar.
https://www.gofundme.com/f/help-with-burial-costs-and-put-carl-to-rest?utm_source=customer&utm_medium=email&utm_campaign=p_cp+share-sheet