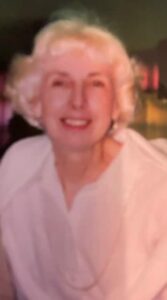 Carol Anne Copan-Mora, 78, of Newton, Massachusetts passed away of natural causes on October 11th, 2020. Carol was born on October 28, 1941 in Stoneham, MA. She married Abel Mora on July 17, 1984 in a lovely ceremony at the Newton Post 440. Carol attended Chandler School for Women and later worked at Brandeis University while raising her family. She was preceded in death by her spouse, Abel Mora and is survived by her sons: William Copan, Christopher Copan, step-son; Kishon Mora , daughter; Holly Peterson; and 9 grandchildren. She loved traveling, dancing, gardening, drinking tea with friends, and spending time with her cats. In lieu of flowers, donations can be made to National Wildlife Federation. Carol was a kind and loving woman and will be missed by many.