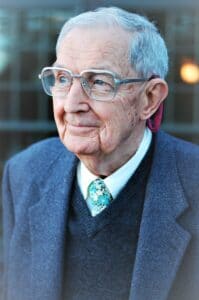 He grew up as an only child moving to many places in Connecticut. His father passed away
when he was 9. His mother was a nurse in the Army during WW2. As a child he loved to watch
airplanes at the Hartford airport & wanted to be a pilot. Steam locomotives & model trains were
at the top of the list of his many interests and remained a lifelong passion. As he grew he
attended private schools and graduated from his beloved school, Northfield Mount Hermon, in
Northfield, Massachusetts. He attended Rensselaer Polytechnic Institute for engineering until he
enlisted in the Army near the end of WW2. After the war he received a bachelor’s degree in
geography at Clark University in Worcester, Massachusetts. He went on to work at the
Worcester Planning Department, the Newark N.J. Central Planning board and the Tri-State
Regional Planning Commission, New York City. He finished his working career at age 87
retiring from the American Insurance group. In retirement he was noted for his love and
encouragement of family and friends, curiosity, a very sharp memory, healthy eating, exercise, a
will to thrive and his enthusiasm for voting, patriotism and politics.

At age 21 he met Jean Killian, age 20, in a family arranged meeting in Dorchester,
Massachusetts. After the war they were married in Grafton, Massachusetts on June 19, 1948.
They spent the of summer ‘48 as Hut Masters for the Appalachian Mountain Club at Lonesome
Lake in the White Mountains of New Hampshire. After graduating Clark University, they
became loving parents to Jan and Dan. They were married for 27 years before their divorce.
After this they developed a caring relationship and shared many family events together.

A celebration of life will be held in the fall in order to include family and friends living at a
distance.