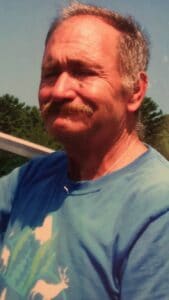 Darrell Smith, age 76, passed away peacefully on Monday, June 6, 2022, at Newton Wellesley Hospital surrounded by his loving Daughters. Born in Bar Harbor Maine, recently a resident of CareOne Assisted Living in Peabody MA, and formally of Mansfield, MA. He is the son of late Natalie Smith (Stuber) and Leroy “Bud” Smith.

Darrell was a jack of all trades, he worked as an electrician, auto mechanic, in the warehouse for Kimberly Containers, drove trucks and worked as an exterminator for Terminix.

Darrell was a devoted NASCAR fan, never missing a Sunday race. Enjoyed attending parties for the “Great American Race” aka Daytona 500! His favorite pastime hobby was Racing Mini-Modified Stock Cars across the New England circuit. He was the driver of the #98 cars starting in his first car a VW bug, later replaced with a Pinto – owned by Frank Procopio. Along w/the owner and crew he earned the 1980 title of (New England Mini Modified) NEMM Points Champion and the 1980 NEMM Championship. Nicknamed “Squirrel” for his love of nuts but lack of being able eat them due to his dentures, suffice to say Reese’s Peanut Butter Cups were the candy of choice.

As an avid sports fan, when not watching NASCAR, you could always find him watching his favorite Boston Teams. He enjoyed the teams of the New England Patriots, Boston Bruins, and Boston Red Sox.

Darrell enjoyed having a dog by his side, a cold beer in his hand and spending his summers (or any free time) up in West Kennebunk, Maine @ Yankeeland Campground where for several years he owned a seasonal trailer. When not patronizing the local watering hole, Darrell obtained a part time job working for Bentley’s Saloon which allowed him the ability to stay most of the year in Maine which was his ultimate Happy Place.

Family and friends are invited to attend a gathering for Darrell’s “Remembrance of Life” which will be held Friday June 24th starting at 4:30pm @ 2 Bunny Hop Way, Taunton MA

In lieu of flowers, memorial donations can be sent to a charity of your choice.