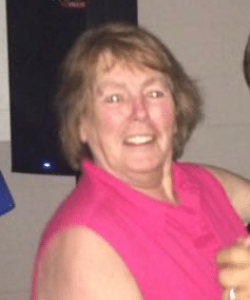 Deborah Ann Stelmach (Farry), a homemaker from Malden passed away suddenly on July 9, 2017 surrounded by family and friends. She was born in Somerville, but spent her entire life in Malden with her husband John where they raised their family.

She was married to her high school sweetheart, John Michael Stelmach, for 45 years when she lost the love of her life in 2014. She leaves behind two children, Laurie Josefowitch (Stelmach) and her husband John Josefowitch, and John R. Stelmach and Jennifer Stelmach. Sister of the late Richard Farry Jr. of Malden and his late wife Jean, Karen Noonan and husband Michael of North Andover, David Farry and wife Sheila of Laconia NH, Sandra Martineau and husband Wayne of Malden, Patricia Gillespie and husband William of Malden, and Thomas Farry and Laura Dewsnap of Malden. She was the sister-in-law of Robert Stelmach and his wife Beverly of Tewksbury. She also leaves behind nieces, nephews, and many friends that were a part of her extended family. Everybody that sat at her kitchen table knew Debbie as a second mother.

Debbie leaves behind five loving grandchildren who she had a large part in raising, Stephen, Christopher, and Kaycee Josefowitch, as well as Ashley and Matthew Stelmach.

Debbie enjoyed spending time with her family, she loved to gamble and play cards with her siblings while hosting holidays. Debbie met many lifelong friends while bowling in leagues, she loved to camp in New Hampshire, and was a huge Disney fan.