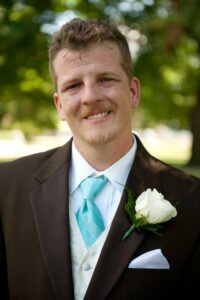 Dennis Arthur Duvall, beloved son of the late Grace Duvall (Mulhern) and late Stanley Duvall Sr. was born on July 17th, 1977 and passed away on January 7th, 2021, bringing an end to a heroic battle of many challenges to his health that spanned over the last years of his life. He was the youngest of 7 biological siblings (Doreen Keeler, Darlene Stanley, Donna Atkinson, Stanley “Chip” Duvall Jr, the late Deanne Stanley, and Derek Duvall), one adopted sister (Rebecca Duvall) and 28 foster siblings.
His childhood family resided in Needham, Massachusetts, where he grew up as a loving presence to his many nieces and nephews, spent his youth skillfully playing hockey and taking part in youthful adventures with his childhood best friends Dan Kopsco, Doug Kopsco and Mike Drury.
It was in Needham also where he eventually went on to work as well, finding employment that would develop into family at Capron Lighting and Sound Inc. where he took on the role of Warehouse Manager and his career and leadership there spanned over 20 years. Those who knew him say that he was the backbone and the heart of the company’s operations. He had a brilliant mind with a dedicated work ethic and thrived in the vigorous and fast-paced environment that he carried out with humor and a flow that made it look easy, when in truth the things their crew accomplished through their annual events were nothing short of miraculous.
It was at Capron that he would meet the love of his life, Andrea McPherson in 2005; an immediate friendship ignited between them and grew over the years until it turned to romantic partnership in 2008. They were engaged in 2009 and married on July 18th, 2010, when she also took his surname. They went on to grow a family together, bringing 3 children into the world: Carlijn Emma Duvall, born July 22, 2013, Dennis Abraxas Duvall, born April 6th, 2016, and Cali Elisabeth Duvall, born July 10th, 2018.
During the years of his health, he took great pride in providing for his family and enjoyed vacationing in Maine, trips to Nantasket Beach and being the “fun Daddy” who would play with his kids from the moment he returned home from work everyday, letting loose during evening dance parties where music and laughter filled the house, and also playing tickle-tag in the backyard during the warm weather months, playfully chasing his kiddos around their winding garden paths and also pushing them on the swing set he brought home to them with the help of his best friend Joe Gagne.
Dennis’ demanding work responsibilities never held him back from making the most of his time at home, a devoted and loving father and husband; even after his health began to decline and he exhausted every option and avenue to return himself to full health. It was his greatest regret in life when his health faltered to the point where his time at home was spent resting in bed and he could no longer interact with his family as he had always loved to do.
His other interests included watching NFL football, being a freedom-fighter for cannabis medicine during the prohibition era, and a social critic with a perspective that he boldly stood for, unafraid to speak his mind on topics that ranged from political to spiritual and everywhere in between; often tempering his words with humor as it was his philosophy that laughter was the most important thing to do in life, even when life made it hard to find a way to do so.
His final days were spent in the comfort of his home under the loving care of his wife Andrea with essential services provided by Trinity Hospice Care that allowed him to live “his way” with dignity until the very end.
In honor of his life and style, no formal services will be arranged, but pending the lifting of covid restrictions, his family is planning an informal Celebration of Life memorial at their home in Fitchburg this July 17th, on what would have been his 44th birthday. All who wish to join in honoring the man that he was is invited to join in the festivities. Email ADuvall17@yahoo.com to receive details on location, time and parking arrangements.
Dennis is survived by his wife and children, 5 of his siblings and their spouses, his adopted sister, many nieces and nephews too great to list individually, and many friends and colleagues from throughout his lifetime, all of whom he loved and was grateful for even when holding differing beliefs because love is the most important thing, always.