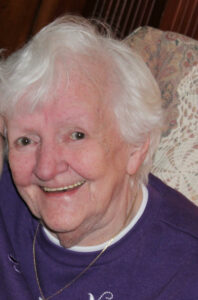 It is with great sadness that the family of Doris Clooney, 85, of Medford, passed away on
Saturday, May 2, 2020. Doris was born in Malden and graduated from Malden High School in 1952. She
was a bookkeeper for a local CPA office in Medford for many years. She married Stephen Clooney in
1955 and raised four sons.
Doris lived a full life in which she found many joys, including antique collecting, spending
summers at the family cottage in New Hampshire, and spending her days cooking, baking, and hosting
holiday meals.
Doris was a fan of Irish music and collected Irish china. She took her lifetime dream trip to
Ireland with her extended family in 1981.
Doris will be missed greatly by her family and friends. She was preceded in death by her
husband, Stephen W., and her sons, Steven M. and James P. Clooney. She is survived by her two
children, Thomas P. Clooney (Lynne), Robert F. Clooney (Annette), and her loving grandchildren, Nicole,
Amanda, Jesse, Hunter, Molly, Brendan, Chip, and Katy.
A private family memorial service will be held at a later date.
Memorial donations in memory of Doris can be sent to a charity of your choice.