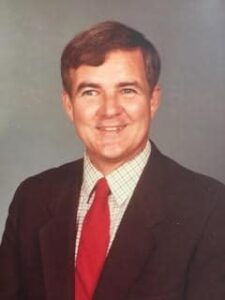 Aged 75, Dr. Kevin J. O’Keefe succumbed to the effects of Parkinson’s disease on March 29. Born and raised in Queens, NYC, Kevin was the son of Eileen McNamara and John O’Keefe, from Co. Clare and Co. Cork, Ireland, respectively.

Kevin lived an especially rich, varied and exceptional life. He attended Bishop Loughlin High School in Brooklyn, received a BA from Queens College (CUNY) and earned his Ph.D. in History from New York University, as well as attained commission as a U.S Naval officer (LT). He served in the Caribbean during the Cuban Missile Crisis and later in the Mediterranean on the U.S.S. Franklin Delano Roosevelt aircraft carrier. Kevin began a long and distinguished career as a Professor of History, spending most of his years at Stetson University, in Deland, Florida. A student and faculty favorite, he was a McEniry award winner (the university’s highest award for teaching), chaired the history department and the Faculty Senate. At the time of his retirement in 2008, he was honored with the status of Professor Emeritus. He is the author of A Thousand Deadlines; The New York City Press and American Neutrality 1914-1917, as well as the editor of a series of publications on American history.

A lover of life wherever he happened to be, Kevin travelled extensively. When he was a young 22 year old U.S. Naval officer on leave, he made his first visit to the seaside town of Kilkee, Ireland, where his mother was born and grew up. He introduced himself to his relatives and became a well-known and heartily greeted friend around the town, returning every year since.

After retirement from academic life, he eventually settled near his sister in the beautiful Cape Cod town of Provincetown, Massachusetts, where, as everywhere that he has spent some time, he was warmly regarded.

Kevin was pre-deceased by his parents, and his brother, John, and his sister, Mary. The second of six children, he is survived by his brothers Gerald O’Keefe and Peter O’Keefe, and his sister E. Patricia O’Keefe Curran, along with several nieces and nephews: Eileen, Jerry, Jennifer, Meg, Kristen, Katherine, David, Kevin and Mariah; and grandnieces and grandnephews: Maureen, Katie, Dean, Patrick, Lexie, Ryan, Sarah, and Stone. His family and many friends will all miss his wonderful wit, as well as his generous spirit. He’ll be remembered with a smile.

Kevin requested that his body be donated for Parkinson’s Research and so it has, to Massachusetts General Hospital. He lost his chance for a cure, but wanted to contribute to the endeavor.