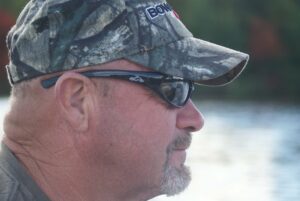 Ashburnham – Edward “Ed” D. Stevens, age 67, died among family at his home in Ashburnham, MA. on August 27th after battling brain cancer. Ed was born in Worcester, MA. to Harroll and Hazel Stevens in 1953 and grew up in Auburn, MA. After graduating from high school, Ed joined the Marines attaining the rank of Sergeant. Upon leaving the Marine Corps (not really, once a Marine, always a Marine) he worked as an independent carpenter and builder and then as custodian and groundskeeper for the Ayer school system retiring in 2017. Ed was an avid outdoorsman who enjoyed deer hunting, fishing, and spending as much time as possible outdoors. He also enjoyed spending time on his boat with family and friends on Lake Monomonac or in his garage building cool stuff and drinking an “occasional” beer.

Ed is survived by his loving wife of 34 years Shirley Stevens; daughter Barbara Dupuis and her husband Jason Andersen; son Robert Dupuis and his wife Treon Dupuis; three grandchildren: Theo Andersen, Margaux Dupuis and Annie Dupuis; two sisters: June Halberg and husband Bob and their daughters Stefanie and Kirstin (Husband Phil Davis and sons Hunter and Chase), and Barbara Gould and her daughter Kindra (son Perry and daughters Kelly and Zoey); as well an assortment of nieces, nephews, sisters-in-law, brothers-in-law, friends and what not.

There will be no visitation and a private service will be held at the Massachusetts Veterans memorial Cemetery in Winchendon MA.

In lieu of flowers, gifts may be made to the Glioblastoma Foundation in memory of Edward Stevens to support ongoing research for better treatments at:

P.O.Box 62066
Durham, NC 27715
or via glioblastomafoundation.org/get-involved/donate

Or to The Nature Conservancy supporting responsible and balanced habitat maintenance at support.nature.org.

Or, go get some beer and watch the sunset or a passing storm with someone close to you.