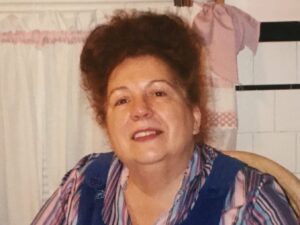 Elizabeth (Betty) G. Pieroni (Muscarella), 81, of Everett, MA, passed away on Saturday, October 28, 2017. Betty was born in Boston and lived her entire life in Everett. She was the daughter of the late Joseph and Elizabeth (Guarino) Muscarella. She was the beloved sister of the late Marie Martino of Malden, sister-in-law of Buddy Martino of Malden and sister of Louis Muscarella. She was the mother of the late Joseph Pieroni and the late Anthony Pieroni. She was loved and cherished by her daughter Gerri Harrison and son-in-law Jon of VT, daughter, Rhonda Pieroni of Boston, and daughter Brenda Dinsmore of Everett and son-in-law Scott. She adored her grandchildren: Victoria Stranz and her husband, Matthew Stranz of FL, Scott Dinsmore of Everett and Kate Harrison of VT. She is also survived by two special four-legged grandchildren: Zoe of Boston and Jasper of VT and her feathered friend, Peaches of FL. Betty also leaves many friends and neighbors and has touched the lives of many who have crossed her path. When you met her, you knew she was someone you wouldn’t forget and you were certainly on her mind and in her prayers when you needed help.
She was a strong, determined women with a profound sense of humor. She had a fierce love and devotion to her family and nothing brought her greater joy than to have everyone sit around the dining room table for a meal, especially a dish of macaroni and meatballs on a Sunday. She was honest and always told it like it was. Her belief and faith in God were extremely important to her and everyone who met her knew it. She made many friends whether in person or on the phone.
She will be deeply missed by her family and friends.
Private burial services will be held at a later date. In lieu of flowers/gifts, Betty’s family asks that you remember her by offering a kind deed, word, or prayer to someone in need.