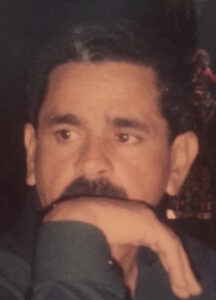 Ernesto Juan Rodriguez, 72, died Saturday, May 14, 2016 at Whidden Hospital in Everett, MA, after his courageous battle with diabetes and alzheimer’s disease.

In his early years, Ernesto graduated from Central High School (PR) in 1967, he attended Instituto Commercial (PR) graduating in 1969 with an associates degree in Accounting. He met his wife, Iris Fonseca, at work when they were both employed in Banco Obrero (PR) and they were married in 1971.

Ernesto had two passions in life: his family and horses. He lived to love and be loved by his family and was an avid fan of the excitement of horse racing (and an occasional winning ticket). Ernesto touched the lives of all who met him. His smile, honesty, and sense of humor (a jokester until the end) will be remembered by all those who knew him. To know him was to love him and he will be missed. His family looks forward to the day he will welcome them home in the presence of the Lord. Until then…

Memorial service will be held at La Catedral San Juan Bautista, Calle del Cristo, San Juan, Puerto Rico in June. His family looks forward to bringing him home to his island, the place that he loved the most.