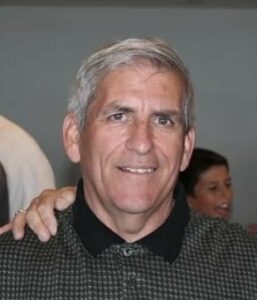 Gary W. Palmieri, 74, passed away Friday, January 15,2021, at The Maples Rehabilitation and Nursing Facility Wrentham, Ma, after a lengthy illness. He was the loving husband of Mary Ellen (Hodgins) Palmieri, to whom he was married for 47 years.

Gary was born on December 17, 1946, in Bangor, Maine and was the loving son of the late Marco and Charlotte (Page), Palmieri.

Gary spent his youth in Orono, Brewer, and Pushaw Lake in Maine. Growing up, his fondest memories were his visits to cousins in Connecticut and summers at the camp on Pushaw Lake. He loved to golf and rooting for the Yankees. As a student at John Bapst High School in Bangor, Maine, Gary was active in school sports and activities and was inducted into the Athletic Hall of Fame in 2019. Gary was a 1965 graduate of John Bapst and a 1970 graduate from the University of Maine, Orono, with a Bachelors’s in Education.

Gary worked for over 20 years with McDonald’s Corporation in Maine and Massachusetts and was a franchise owner from 1990-1996. Gary continued working in the restaurant business until his retirement in 2005. In retirement, Gary spent time with his family and grandchildren on trips to Chincoteague Island, Virginia.

Gary was a longtime resident of Mansfield and was active in his community and with his children’s lives. It was not uncommon to find Gary working the sidelines at his son’s high school football games. Family was truly the focal point of his life and always came first. He is survived by his wife Mary Ellen of Mansfield, daughters Stacey and husband Guy and Tammy and husband Bob Conner both of Winthrop, Maine, sons Gary and wife Kerry Palmieri of Franklin,MA, Ryan and wife Jacquelyn Palmieri of Mansfield, MA, Nicholas, and wife Bianca Palmieri of Franklin, MA, and Jason Palmieri of Marion,MA, in addition to many loving grandchildren and great-grandchildren.

He is also survived by his brothers Joseph (Sue) Palmieri, of Bangor, ME, and Mark (Carol) Palmieri of St. Johnsbury, VT.

Gary is predeceased by his brother Richard and sister Vanessa.

Gary will be fondly remembered and loved by his brothers-in-law and sisters-in-law in Maine and an aunt and uncle in Colorado, and many nieces and nephews and cousins from Maine and Connecticut.

As a memorial to Gary, family, and friends are encouraged to make donations to the Alzheimer’s Association or Ronald McDonald House Charities.

Many special thanks to his caregivers from the Rockport unit at Maples, who showed Gary love and compassion for many years.

Due to the current restrictions with Covid-19, all services will be privately held by the immediate family.