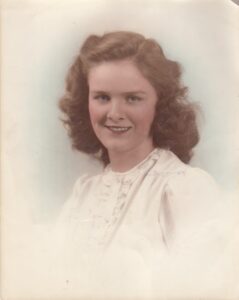 Grace Mary (Nestor) Allonby, passed away Monday, January 15, 2018 after a brief illness. She was the beloved wife of the late Frederick Roy Allonby; a devoted mother and mother-in-law of Judith Allonby of Malden, Joe Allonby & his wife Nancy Minehane of Brighton and Karen and her husband Paul Walsh of Salem, NH; the adoring grandmother to Louise Walsh of Londonderry, NH and Paul, Steven, and Kellyann Walsh of Salem, NH; the daughter of the late Joseph and Grace Nestor of Medford; loyal sister and sister-in-law of Kenneth and Margaret Nestor of Billerica, John and Jane Nestor of NH, sister-in-law of Barbara Nestor of Hanover and the late Helen Dugan, Joseph Nestor, James Nestor, George R. Nestor, Robert Nestor and Isabel Ralston; the “cool aunt” to dozens of nieces and nephews in whose lives she enthusiastically participated along with several dear friends. Grace will be remembered as a fiery redhead, tomboy, an avid fan to all Boston sports teams and lover of the arts, especially film, she will be missed by all who had the pleasure of knowing her.

In lieu of flowers, donations in Grace’s memory may be made to: the Alzheimer’s Association, 309 Waverley Oaks Rd, Waltham, MA 02452