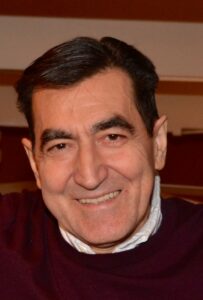 Harry George Pappas, age 63, passed away October 2, 2015 after a valiant fight against cancer. He was the loving husband of Deborah A. (Monaghan)Pappas, of Saugus and Winthrop, MA, cherished father of Michael Pappas and his wife Sophia Nanis of Salem, MA, Valerie Bettencourt and her husband Tony of Danvers, MA, Ryan Harrison of Lynn, MA and Shannon Harrison of Saugus, MA. He was the adored grandfather of Marco and Serena Bettencourt;dear friend of former wife, Marie Bourgeois and treasured brother-in-law, uncle and friend to many. Harry emigrated from Greece to Canada and ultimately settled in the United States as a young boy. He mastered the English language while growing up in Lynn, MA. Harry was passionate about music and was self-taught in guitar. In the early 70’s, he played in several bands on the North Shore, including Bit O’ Lemon. Harry labored in the shoe factories of Lynn by day while earning a Bachelor’s Degree at night from Northeastern University in 1980. He was a long-term employee of both New England Life and Deloitte & Touche where he developed lifelong friendships and earned praise as a manager and colleague due to his strong work ethic, quick wit and willingness to help others. Harry enjoyed music, dancing, cooking, reading, history, and traveling. But, he was happiest at home with family and friends. In keeping with his generous spirit of helping others, Harry’s wish was that his body be used for research at Harvard Medical School. Donations may be made to the Jerome Lipper Center for Multiple Myeloma, 44 Binney Street, Boston, MA 02115. A “ Celebration of Life” will be held: Friday, 10/9/15 at the Danversport Yacht Club, 161 Elliott Street, Danvers, MA 02115. Memorial service begins promptly @ 2:15 p.m. Reception and collation immediately following. &nbsp;