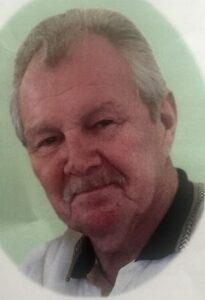 Age 74, Son of the late Elizabeth McClernon Dudley of Dublin Ireland and the late Hugh S. Dudley SR of Inniskillen Ireland. Beloved husband of 52 years to Linda (Vail) Dudley. Died peacefully at home on February 18, 2016 surrounded by his loving family. Born in Belfast Ireland came over here on the Queen Elizabeth when he was 6 years old. Sam attended Waltham High School and from there enrolled right into the U.S Navy as an engineer on the U.S.S Peterson during the Cuban missile crisis where he received a medal of honor.. His ship was in the movie PT-109 as the German destroyer (For only 5 minutes). Sam was also on the U.S.S Alacrity ship. He then went on to work as an elevator mechanic for Beckwith Elevator Co. from 9/1/1962 and retired in 10/1/2004. He then began to work part time locally at the Hanson Ace Hardware from 2007-2015. His interests and hobbies included gardening, yard work, crossword puzzles, playing his guitar, carpentry, and reading. He loved family gatherings cruising, loved his scratch tickets, his witty jokes, a perfect cigar, and never failed to visit his late son James Dudley every day. He lived for a good conversation and lunch at D’Ann’s Restaurant in Abington MA. He was a member of the American Legion and VFW in Abington MA as well.

In addition to his wife Linda, Sam survived by his Daughters Kelly Dudley of Kentucky, Kerry (Dudley) Croke and husband Lee Croke of East Bridgewater, His son John F. Dudley of Lakeville, the late James Vail Dudley of Hanson MA, also His 5 Grandchildren Nikki Saccone of Whitman MA, Carly and Brandon Richardi of Hanson MA, Kelsy Dudley of Bridgewater MA, and the Late Amanda Dudley of Plymouth MA, two great grandchildren Joey and Sammy Saccone and many nieces and nephews. He was the younger brother of Frederick and wife Edith Dudley of Florida and also younger brother to his two sisters Marie and her husband David Chaission, and the late Dorothy Terrassi of Acton.

A Celebration of Life Mass will be held Friday, March 4 at 11am at St. Joseph the Worker Church in Hanson. Friends may have the visitation with the family at the church gathering area from 10am until the time of the mass. Interment with military honors will follow at Fern Hill Cemetery. In lieu of flowers, donations may be made to the Sam Dudley Family Scholarship, c/o Mutual Bank, 430 Liberty St., Hanson MA 02341 to be given to graduating seniors at Whitman Hanson High School in theatre, drama, show choir and performing arts.

A very special thank you to the caring staff at Old Colony Hospice, at Dana Farber Thoracic Oncology Department in Boston and the Brigham & Women’s Oncology Radiation Department.