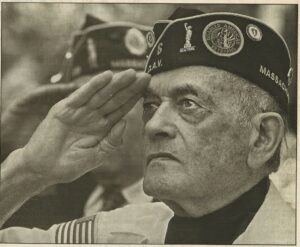 John J. Paganelli, 89, of 55 Mt. Pleasant St., Milford passed away on Monday, February 6, 2017. His was the son of the late Matteo and Nellie C. (Salvia) Paganelli. He is survived by his wife of 64 years, Irene Anna (Rossetti) Paganelli. John is survived by two sons, James (Jimmy) T. who resides in New Vineyard, ME and John J., Jr. along with his wife, Kaoru, and their two sons: John Takashi and James Hitoshi (Toshi) of Milford. He is also survived by several siblings; Virginia A. Clark from Frederick, MD; the late Giacchino (Jack) Paganelli, the late Louis P. Paganelli and his youngest brother, Guytano (Tommy) Paganelli who resides in Clinton, MA, his sister-in-law, Gloria M. Ruggiero of Milford along with many cousins, nephews and nieces.

John was an army veteran; he was stationed in Stuttgart, Germany for a period of two years and was assigned and trained to be a Private First Class, (PFC) Ham Radio Operator at the First Army Regiment Headquarters, 68th Constabulary Squadron. He was later promoted to Lieutenant. Due to a serious army vehicle accident, John was honorably discharged from military service.

Upon his return to the United States, he re-entered and graduated from Milford High School and went on to graduate from the Worcester Trade Academy where he specialized in carpentry and cabinet making. He took several adult evening classes at the Blackstone Valley Vocational Regional School ‘Upton, MA and attended Dean (Jr.) College in Franklin, MA.

He owned and operated his own business building custom homes and doing quality finish work; he did this for the majority of his working life. He later joined the Massachusetts Carpenters Union where he worked on various construction projects throughout the state.

Being an active veteran, John held the position of Commander, twice, at the Medway VFW in Medway, MA. He also held a membership of the Natick American Legion and regularly participated in D.A.V. volunteer recruitment activities.

There will be no calling hours; arrangements are being entrusted by Boston Cremation Services out of Malden, MA. A special thanks to the staff at the West Roxbury VA Hospital where John received his primary care throughout his lifetime and a special thanks to Milford Regional Medical Center, Blaire House and Medway Country Manor. A memorial mass is scheduled for Saturday, February 18, 2017 at 10:00am at the Sacred Heart of Jesus Church, Lower Chapel, located at 5 East Main St., in Milford. Family and friends are welcomed to join us in celebration of John’s life during this special mass.