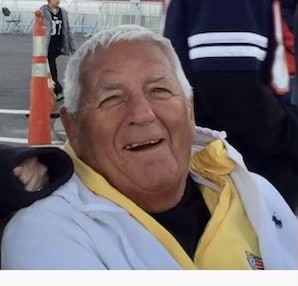 On April 14, 2021, the world lost one of its most colorful characters, John J. O’Brien, also known as “Pops”, of Weymouth, Massachusetts. John graduated from North Quincy High, where he played football as a tight end. He then went on to attend Northeastern University, graduating with a degree in Business. In 1966, as a successful entrepreneur, John and a business partner established Grinold O’Brien Sales company; an innovative business that was top in the country, representing manufacturers/distributors of automotive parts.
Though carrying many personal and professional accomplishments, Pops biggest pride and joy was his FAMILY, being a father to seven, and grandfather to thirteen. His greatest joy was spending time with his loved ones, including many family gatherings on Lake Winnipesaukee. John was also an avid New England Patriots fan, holding season tickets for 30 plus years. Deemed a super fan, his sons later gifted him his own designated seat at Gillette, marked with his name on a plaque. Safe to say, the pregame tailgate parties were legendary, much like every place that Pops attended, as he was the life of the party.
Many people have fond childhood memories of Pops, from his “Public Welcome” signage inviting people to the back yard pool, to his infamous “DQ trips.” He would jump into his signature Cadillac, and beep the horn twice. Family and the neighborhood kids come from all directions, squeezing into the car for the ice cream trip. Never forgetting the kids that couldn’t fit, John would be sure to return with a few bags of Buster bars. Leave it to Pops.
John approached life with a mind over matter mentality. His charismatic, stubborn, and a persuasive personality allowed no task to be deemed unachievable. It was this same mentality which allowed him to complete 9 marathons: 7 New York and 2 Boston. The training, although fueled by a can of carb-filled Budweiser, was nothing short of intense. After each race, Pops would add his running shoes to the “sneaker tree” in the backyard, which was accompanied by a sign reading “This tree grows 2 feet every year.” John certainly had a taste for the unique, summarized by his wooden sculpture collection he adopted later in life. One of his original pieces in 2010 was a 9ft rendition of King Kong, weighing over a ton. Safe to say, it did not end there, eventually ending up with a whole backyard of “zoo” animals. Of course, all were welcome to come and visit.
At age 75, Pops got his first tattoo of his seven kids names and the words “End. Final.” That was a symbol of his quirky humor, that at age 75 he was done having more kids.
John is survived by many, including his loving wife, Pamela O’Brien, along with the seven kids and their spouses: John O’Brien and his wife Ellen of Plympton, Doug O’Brien and wife Sandy of Weymouth, Mark O’Brien and wife Karen of Whitman, Scot O’Brien and Sandy Martin of Hanover, Keri Dezell and husband Jim of Pound Ridge, NY, Erin Langhorst and husband Steve of Marshfield, and lastly Michael O’Brien of Weymouth. Pops grandkids Brosnan, Faith, Khelsea, Dougie, Andrea, Michelle, Patrick, Scotty, Ivy, James , Max, Frankie, and Joe will never forget their Pops. They’ll always carry his spark, humor, strength and love in their hearts. Special mention to the many Godchildren, nieces, nephews, siblings and friends, who all added to his wonderful life. God Bless You Pops, we love you, you did it YOUR WAY.
In celebration of his life, a Mass will be begin at 10:30am on Tuesday, April 20th at Sacred Heart Church in Weymouth. Those who would like to attend are asked to preregister by clicking here. The service can also be viewed live by visiting the Sacred Heart Parish channel. In lieu of flowers, donations can be made to Hospice of the South Shore, 30 Reservoir Park Drive, Rockland, MA 02374.