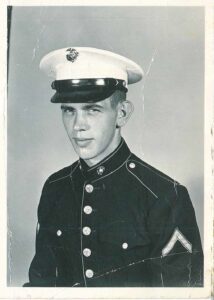 John K. Buckley, age 91 of Quincy, MA passed away on September 9, 2021, after battling a brief cardiovascular illness. He received compassionate and caring end of life care at Season’s Hospice of Milton. John was born and raised in South Boston and Dorchester, along with his six siblings. He was a Golden Gloves Boxer prior to joining the Marine Corps. As a Marine, he served in the Korean War and was honorably discharged. Following his discharge, he continued his government service in the Registered Mail division of the USPS. Upon retirement, he took on yet another career in facility maintenance for the Milton Public school system. He was never one to sit still!

John was an active member of the Disabled American Veterans organization, serving as the local chapter Commander for several years; he was active in fundraising efforts and participated in many Veteran’s Day Parades. In his spare time, he was a talented carpenter, an avid reader, and he was on the O’Lindy’s bowling league in Quincy for many years. In recent years he was a resident of Brookdale Quincy Bay, where he made many friends and enjoyed being part of that community.

John was preceded in death by his wife of over 50 years, Anna, for whom he was a devoted caregiver; and also, by his four brothers and two sisters. He is survived by his daughter Cathie Range and his son-in-law Mike Range, as well as several nieces and nephews, grandnieces, and grandnephews.

A funeral service will be held on Wednesday September 15, 2021 from 9-11am in Boston Cremation, 116 Franklin St. QUINCY with burial to follow at Mount Wollaston Cemetery in Quincy.

In lieu of flowers, please consider a donation in John’s memory to Disabled American Veterans www.dav.org or Seasons Hospice https://seasonsfoundation.org