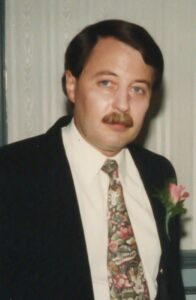 John Sargent, 68, of Weston, passed away peacefully at a hospice home in Wayland, after a brave struggle with a brief illness.

John was known and respected by many for his vast knowledge and love of jazz and classic films. Many local and well-known jazz artists were astounded by John‘s innate passion and understanding of this art form. Inspired by his mother, Madeleine, John enjoyed a lifetime of observing and listening to great music and was a huge supporter of the local music scene. John and his mother passed their love and passion on to younger brother, Gray, who fashioned a wonderful career as a jazz guitarist, in large part from the inspiration of John and their mother.

John was well known to anyone who frequented “Zounds”, a unique, used record store, where he worked as a young man and shared his wealth of musical knowledge. However, John was most proud of the wonderful and tender care he took of his beloved parents throughout their later years. He was the quintessential caregiver.

Many friends and family fondly recall John being the source of gales of laughter at most gatherings, as he possessed exceptional wit, he would always happily share.

John is survived by his beloved brother and sister-in-law, Gray and Pam Sargent, of Hull, several adoring cousins, many good friends, and his beloved girlfriend and constant companion of the last four years, Margaret Johnson, of Bedford, with whom he enjoyed each day and many adventures, along with their close circle of friends. His family is ever grateful that John and Margaret enjoyed this loving experience before the end of his journey here.

Family and friends would also like to thank Miriam Boyd Parlin Hospice Home in Wayland, for the wonderful and loving care they provided to our beloved John, during the last week of his life. We are also overwhelmed by the outpouring of heartfelt sympathy and beautiful memories and stories of friends, family and acquaintances whom John touched so deeply.

The celebration of John‘s life will continue at a later date, as soon as friends and family can safely assemble.