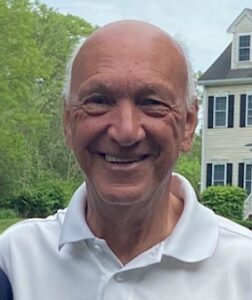 Joseph (Big Joe) Caggiano Jr. passed away in the loving care of family members on Friday, March 11th after a courageous battle with cancer. A devoted father, grandfather, brother, uncle and friend, Big Joe was beloved and admired by his many friends and family, for whom he lived his life for.

Born and raised in the Bronx, NY, Big Joe met his wife Connie in 1961, at the young age of fifteen. Connie was the love of his life, and they remained together until her untimely passing in December 2018. He is survived by his two sons, Joseph III and Anthony; their spouses, Sarah and Holly; as well as his six grandchildren, Krysti, Kaitlyn, Joey, Alexis, Lauren and Zack. His sister Margaret DePiro was his closest confidant who cared for and supported him throughout his entire life.

An Army veteran, Big Joe served his country faithfully as a young man before entering the workforce. A life-long golfer, baseball player and all-around athlete, he spent most of his adult life working on Wall Street until retiring to pursue his second career as a professional golf instructor. Big Joe proudly served as the former Boys Varsity Golf Coach at Notre Dame High School in Lawrenceville, NJ.

Services in celebration of his life will be private for family and close friends. In lieu of flowers, memorial donations can be made to the Dana-Farber “Defy Cancer” Campaign or the Hope Health Hospice Center, both organizations who provided exceptional care during the last six months of his life.