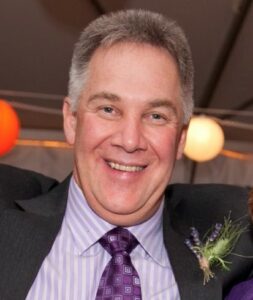 Joseph F. Carlevale, Jr., of Ipswich, MA passed away July 11, at the age of 59 after a short and courageous battle with cancer. Devoted to his family, community, and the game of hockey, Joe was the ‘salt of the earth’ – a caring, honorable man with a love for life.

After skating in the first Junior Hockey League formed in Massachusetts, with the Weymouth Conquistadors, Joe was drafted at the age of 16 by the Sherbrook Castors in Canada. He became one of only a few US-born players to be selected to play Major Junior Hockey in Canada. His performance on the ice saw him play in a Memorial Cup Championship and participate in the International World Junior Hockey Tournament, in Finland.

In Canada, Joe was recognized throughout the league as a rugged player, yet he was beloved by teammates for his fierce loyalty and ability to protect and defend them. This reputation resulted in a mid-season trade to the Laval National, where he was called upon to protect a future NHL Hall-of-Famer, Mike Bossy.

When Joe’s professional hockey career concluded with the NHL Atlanta Flames, his passion for the game found a new home at Newburyport’s Graf Rink where he played his last game with his cherished hockey pals. Known as “coach” to many including his daughters and grandchildren, Joe took pride in volunteering and ‘giving back’ to the game that gave him so much joy. Joe was a true New England sports fan and loved catching a Bruins, Red Sox or Patriots game.

Joe loved the outdoors- kayaking, biking, digging clams, golfing, snowshoeing, mowing a perfect lawn, and especially the ocean at Crane’s Beach. He appreciated the fine arts, cooking Italian raviolis from scratch, a good brunch, and reading history. Above all, Joe was truly a family man who took pride in his beloved daughters and wife.

Joe was a successful Sales Manager for nearly 20 years at Atlantic Semiconductor where he cultivated relationships with people from all over the country. Honest, reliable, and a great sense of humor, Joe never backed down from a challenge, and was truly a man of his word.

Born October 4, 1957, in Boston, MA, Joe was the beloved husband of 33 years to Jeanette Bullock Carlevale. Devoted father of Michelle Hayhurst, Jacqueline Carlevale, and Rachael Carlevale. Father-in-law of Brian Hayhurst, Jordon Feider and Mathieu Davenport. Loving Papa Joey of Colton and Ella Hayhurst. Son of Joseph and Joyce Carlevale of Randolph, he is also survived by his sister Linda Carlevale and brother Steven Carlevale, and predeceased by his sister Lisa Carlevale.

Friends and family are invited to attend the Funeral Service on July 22, at Trinity Episcopal Church, 124 River Road, in Topsfield MA at 2:00 PM. In lieu of flowers, and in celebration of Joe’s life, donations may be made in his memory to the “Joe Carlevale, Jr. Hockey Scholarship Fund”, and mailed to Michelle Hayhurst at 1 Dennison Court, Georgetown, MA 01833.