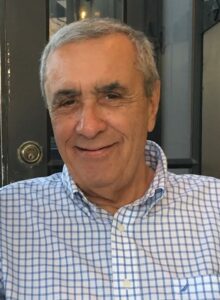 Joseph Michael Savani, 71, passed away after a courageous battle with cancer at The Kaplan Hospice House in Danvers, MA on Father’s Day, June 17, 2018.

Joe was born in Somerville on December 10, 1946 to the late John Savani and the late Agatha (Conti) Savani. He was raised in Arlington where he graduated from Arlington High School and later from Industrial Tech in Boston. He studied HVAC and went to apprentice school at the Pipe-fitters Union No. 537. In 1967, Joe was drafted and served his country honorably in Vietnam. After returning from war, he worked for many years in the field of HVAC before he started his own company and became a very successful businessman and entrepreneur.

Joe was the beloved husband for fifty years to Anna (Accorto) Savani of Gaeta, Italy, the devoted father to three daughters, Marcella (Savani) Ronayne and her husband Anthony Ronayne of Melrose, MA, MaryAnne (Savani) Skotis and her husband William Skotis of Litchfield, NH, and Nadia (Savani) Hardy and her late husband Sean Hardy and her fiancé Ron Jock, both of Litchfield, NH.

Joe is survived by two sisters, Janice (Savani) Mathias of Billerica, MA and Pauline (Savani) Flemmings of Bath, ME. He was also the loved uncle to many nieces and nephews.

Joe loved to golf, although he never took the game too seriously. His many friends remember him as an avid golfer who simply loved the game, loved to laugh, cuss, joke, and have fun. La Playa Golf Course in Naples Florida will certainly never be the same.

Joe was known by all for his generosity and kind, giving heart. He was a long time supporter of St. Jude Children’s Research Hospital as well as Doctors without Borders. In lieu of flowers, memorial contributions may be made to either of these charities that he so faithfully supported.