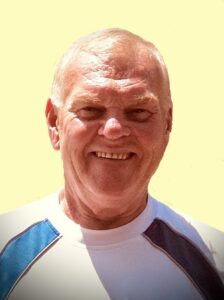 Kenneth Stephen Fallon Jr, age 74, passed away peacefully on Wednesday, April 21, 2021, after a courageous hard-fought battle with COVID-19, #Fcovid. He was a lifelong resident of Mansfield, and as a young child, he also lived in Austria, Germany for 2 years.

Born in Boston on March 20, 1947, he was the eldest child of the late Kenneth and Virginia (Runci) Fallon. His youth was spent on the fields and courts in town with his brothers Kevin and Keith. Ken “Red” was a 1965 graduate of Mansfield High School and a standout athlete in football, basketball and baseball. He was later inducted into the Mansfield High School Hall of Fame for football in 2005.

After the untimely passing of his father, he began working early on in life at the Donut Kettle in Foxboro to help support the family. Subsequently, he received a degree in accounting from Burdett College. In 1977, he went on to work at the Foxboro Company where he met his devoted and loving wife of 42 years, Maryellen (Gardner). His professional career brought him to Waters Corporation/Millipore in Milford as a production and inventory control analyst, until he retired at the age of 62.

He was so passionate about sports that quite often you would find him on a field coaching, officiating or cheering on his favorite teams. For nearly 50 years, he served as a high school football official in the state of Massachusetts, serving on the Massachusetts Independent Football Officials Association (MIFOA) and the Southeastern Massachusetts Football Officials Association (SMFOA) boards. In 2015, he was honored by the Gridiron Club of Greater Boston with the William Stewart Award as the Outstanding High School Football Official of the year. He had such devotion to the sport of football, that he loved waking up Thanksgiving morning with his bag packed and ready to go to officiate some of the oldest and biggest high school rivalries in the state of Massachusetts. Ken met many of his lifelong friends on the football field, whether they were in stripes, on the sideline or even in uniform. He has been referred to “as somewhat of an officiating legend in our area.”

In 1990, Ken was co-founder of the Mansfield Girls Youth Softball League. He served as President for many years and also coached several of Mansfield’s finest female athletes. He went on to assist his daughter, Kate, at Franklin High School for many seasons, influencing the lives of student athletes.

He savored a good meal and watching the Patriots or Red Sox on TV surrounded by friends, family and his favorite dog Emma Louise. In conversation with friends, he was quick with advice and always had time to listen. Ken and his son Kenny were members of the Benevolent and Protective Order of Elks Lodge #2633 in Mansfield, where you would often find him enjoying a stiff drink or two with his family and fellow cronies or at the Mandarin in Foxboro.

Ken is survived by his wife, Maryellen (Gardner), his children Kenny III of Mansfield, Kate Fallon-Comeau and her trophy husband Chris Comeau of Norton, his loyal brothers, Kevin Fallon and his wife Jean of Mansfield, and Keith Fallon and his wife Lee of Saint Augustine, FL. He is also survived by his furry companion Emma Louise, his furry grand-dogs, Bella Fallon and Anna Felicia Comeau and his two grandchildren Christopher Comeau and Zoey Laur, as well as many nieces and nephews. As a friendly reminder our family puts the F-U-N in funeral! Please join in a “parting glass” and celebrate his life the way Ken would have wanted.

Visiting Hours will be at Boston Cremation (formerly Bolea Funeral Home), 115 North Main Street, Mansfield on Tuesday, April 27th from 3-7 PM. Please be mindful of the COVID restrictions: 25 people allowed in the building at one time, we are asking guests to please pay their respects and exit so all have an opportunity to do so. We thank you for your cooperation during this time.

A mass of Christian Burial will be celebrated at Saint Mary’s Church, 330 Pratt Street, Mansfield on Wednesday, April 28th at 11 AM, followed by interment at Saint Mary’s Cemetery, Mansfield. All attendees are required to adhere to COVID protocol, wearing masks and abiding by social distancing guidelines. The funeral will be live streamed at https://stmarymans.org for those unable to attend. In lieu of flowers, donations can be made in memory of Kenneth Fallon Jr, to Boston Med Flight, 150 .Hanscom Drive, Bedford, MA 01730, www.BostonMedFlight.org.