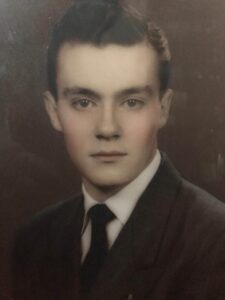 Larry as he was known, was born in Revere on October 12, 1929 the son of Maria (Seporiti) and Ernesto Breda. He is proceed by his brothers Lorenzo, Ernesto Jr. , Virgilo, and his sister Angela Breda.
In his youth he worked at both,The Revere Theater on Broadway, and The Beach View Theater in Revere, where he met the love of his life Dolores Landano.
He was proud to serve in the National Guard at camp Edwards in 1948. His life long friend the late Jerry Kaestner taught Larry photography at the late Anthony M Ferragamo’s Coronet Studio’s.
He worked in the printing industry for Forbes in Chelsea until its closing and then at Rust Craft Cards and Printing in Dedham, eventually retiring from Uni-graphic in Saugus.
Larry loved Ocean View Dance Hall on Revere Beach, where he enjoyed dancing for 25 cents on Saturdays with Dolores. He was a Member of Bellevue Golf Club, in Melrose for 38 years where he spent many joy filled days.
He was the loving husband of Dolores J. Breda (Landano) for 66 years. Beloved father to two daughters, Lorna Moss of Cumberland Foreside Maine, and Renee Santella and her husband Andrew of Marblehead. Cherished Grandfather to Jacqueline Moss, Daniel Moss, Matthew Moss, Adam Santella, and Alexis Santella. He leaves many nieces and nephews and good friends.
Services are private. However there will be a Memorial Celebration of Larry’s life in April at Bellevue Golf Club, all are invited to join.
Family and Friends may view, and post online condolences, get contact email, and see further information to join us at the Memorial Celebration in April at this website address below.
https://lawrencebreda.wordpress.com