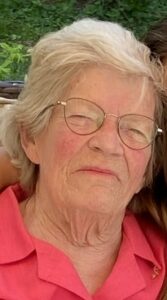 Lee had a profound career working for Child Welfare Services as a Social
Worker, then a Teacher in Vermont. She also sold Real Estate with many
loyal and grateful clients. She was a certified Tax Preparer and retired from
the Christmas Tree Shops in 2007.

She enjoyed Family, Friends, Playing the Organ, Cross-stitch(many friends
and family proudly display her work), Gardening, Camping, and most
recently, Pogo computer games. Sunday nights were always spent hurrying
to complete her games for the week. Lee was an avid sports fan and
particularly loved the Patriots.

Lee and Robert Hubbard married in April of 1965, and remained madly in
love beyond his passing in 2001. Together they raised one
daughter, Deborah Hubbard Anders (now of Braintree MA).
Lee is survived by Deborah Anders, daughter, Scott Anders, Son in-law,
Lachlan Anders, grandson, Patrick Anders, grandson, Grace Anders,
granddaughter, Lois Donohue, sister in law and many Nieces, Nephews and
friends. Lee was a friend to everyone she met and her relationships with
friends and family were the cornerstone of her happiness and zest for life.
She never missed a party or an opportunity to gather for celebrations of any
kind, it was her brilliant smile that drew people to her. Her pride and joy
were her grandchildren and she was intensely involved in their daily lives
until her end. She was their biggest cheerleader and president of their fan
clubs. She will be missed on the sidelines of many youth sporting events
cheering on her favorite players and their friends.

She was preceded in death by her husband of 36 years, Robert Hubbard, her
sister and partner in crime Susan Hafeman, and her sister, Rosina French.
As Lee peacefully prepared for her reunion, she remained faithful and brave
and embraced the idea that her husband was sweeping off the dance floor in
preparation for her arrival. She spoke with animation to her daughter and
grandchildren about her hopes and dreams for them, giving a few last
minute words of advice.

The family has entrusted South Congregational Church with the
arrangements. A Visiting Hour and Memorial Service is scheduled
for Tuesday June 29th, 12:00 Visiting Hour, 1:00 Memorial Service at South
Congregational Church, 1075 Washington Street, Braintree MA. A reception
will follow at the home of Debbie and Scott Anders. Pastor Scott Killian will
officiate the ceremony.

In lieu of flowers, donations may be made to South Congregational Church
of Braintree.